Wrath Outpost, commonly shortened to Wrath, is a monument that was built during the Third Spawn Incursion by Valkyria, and used as the main spawn base during the incursion. It was given the name Wrath as a symbol of Valkyria's rage towards the other players for the destruction of Asgard II. Wrath Outpost was made completely out of obsidian, making it relatively hard to grief (Although people have been able to lava cast and wither it). Inside of Wrath Outpost was two pieces of bedrock placed by Pyrobyte due to his access to a backdoor, one in the staircase and the other in the center. If Wrath would ever fall, the third incursion would create another spawn base representing another one of the Seven Deadly Sins. Wrath never did fall, meaning that only Wrath would be built.

Wrath Outpost's entrance is a long wide corridor that leads into the heart of the building. The opening has a large arch over it, and large towers stand in front of it. The heart of the Outpost has a simple square perimeter, but the walls are made of giant arches that form into a large dome that goes above the clouds. In the middle of the base there were beacons.

"Also known as SIB (Spawn Incursion Base), the place was built in 1 month. At least 10 players participated on the building. The place was raided a couple times. All the invaders and thiefs caught were mostly killed. Lavacasts were TNTed and removed. The base design was made by Pyrobyte and Dorquemada. The hallways with columns were designed by me as well as the beacon and eagles. The beacon design is the same as the Second Incursion spawn beacon, with a 4 chambers of lava on the base to protect both beacons and the ore blocks as well as more lava along the tube. The only difference in the beacon design was the red glass block, which gave the beam a red color. The structure was built with duped endchests/inf endchests/inf obsidian. The infs were created on past server backdoors and the duped endchests came from 1.4.7 dupe. Lots of people died for that place to exist, mostly enemies. Its both a symbol of strenght and cooperation inside the anarchy server 2b2t. And it will stay there for many years, as a ruin."
―Sato86, May 2015[1] 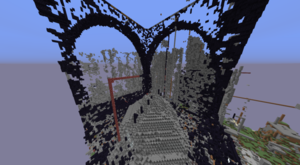 During the Third Incursion, numerous players attempted to grief the outpost. It would be virtually impossible to grief Wrath due to the abundance of players, infinite TNT, and Pyrobyte's Sharpness 666 sword. Popbob attempted to lavacast the inside of Wrath, but it was blown up by Pyrobyte infinite TNT. Jared and taylo also attempted and failed numerous times to invade Wrath, being outnumbered. Jared, Fr1kin, and X0XP also attempted to invade Wrath with an army of bots, but were stopped by a trench made by the incursion.

After the Rusher War, The 4th Reich posted a video on their YouTube channel. The video showed them griefing Wrath Outpost by spawning many withers as well as removing the bedrock placed by Pyrobyte using a method involving a dragon egg. 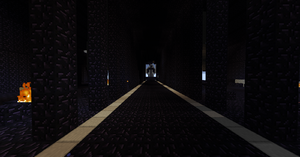 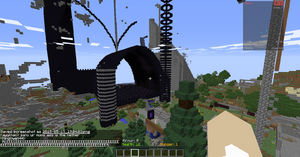 Wrath Outpost under construction
By FlameEyeGamer

A shroud of grey,

Your walls dark as the void,

'tis a shame you're destroyed,

And made it lame,

You came to us in our plight,

Now you stand a beacon of light."

A group known as Imperia attempted to fix the Wrath Outpost during the 11/11 dupe, but gave up due to interruptions caused by the Fifth Incursion. BabbaJ said he may also try to repair Wrath, even though he was a part of the grief. 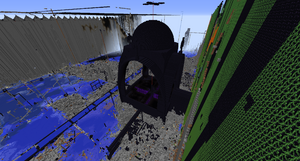 Despite Wrath Outpost being rebuilt, there were “Wrath Copies” as to what SpeedDemon0 has said. These included the Anti-Incursion Wrath located in the opposite axis of The Wrath, the Armorsmith Wrath, The VoCo Wrath (including the second one), and Wrath Village.

Wrath Village was a group remake of the original Wrath Outpost, founded by Nambrose and Jakeolover in August 2019. Alongside them, four other players joined in the re-creation of Wrath Outpost. Those players being CactusDuper, DudeTrash, CementedWall101 (Formerly known as CB_Gator), and Vexxer232. Using 9 E-chest shulkers, and building for 9 hours, a shell of what would soon be called Wrath Village was created. The build stood for five days, hosting 31 players in total, before an unknown player sent the coordinates to the player Enderpearl while he was streaming. He came to the build on stream, leading to many random players coming to the base. After a few attempts at griefing the base by incoming players, the members decided to grief the build on their own to ensure no-one else could. There are currently plans in the works to build a second version of The Wrath Village in the near future.

Retrieved from "https://2b2t.miraheze.org/w/index.php?title=Wrath_Outpost&oldid=62011"
Categories:
Cookies help us deliver our services. By using our services, you agree to our use of cookies.