The World Border is a semi-transparent wall that surrounds the Minecraft world. The border is 30 million blocks on all four sides, centered around Spawn. It was made so that players could not venture into glitched chunks. Back in the days, if you went 12 million blocks out, you would reach the Far Lands, glitched terrain that would make mountains that reached the skies, and infinitely long caves. Mobs also acted weird there, and if you went even further, you would fall through the terrain, and shading did not seem to work. However these Far Lands were eventually removed, and there is no evidence that they were ever generated on 2b2t.

The World Border on 2b2t has been reached in all of the Dimensions of Minecraft (Overworld, End and Nether). 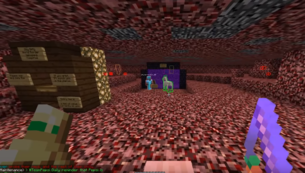 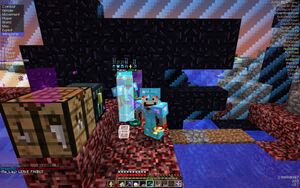 The history of the World Border is shrouded in mystery, as it was reached first sometime in 2011 through a backdoor. This is known due to the findings of chunks from 2011 at the -X Axis Highway. This might have been reached through popbob's or Acid1212's (supposed) backdoor. The modern World Border was first reached by Pyrobyte and iTristan through their backdoor on December 7th, 2013 on the +X axis. There they left some bedrock and two signs. They also teleported to the -X and -Z world borders but did not leave anything there.

The End World Border was first reached by Armorsmith when he took a week to fly using packetfly, lagging the server during the journey. When he arrived, he created a base called Armorland at the world border corner on August 17th, 2017. The base was located at the coordinates X: -30,000,000 , Z: -30,000,000. It has since been reached by players such as Barrendome and Hare_Hare_Yukai.

In March 2020, 0x22, IronException, and l_amp visited all main axis and corner world borders in the Nether, using a teleportation exploit. The Nether world border was first reached via mining on the +X Highway by the Motorway Extension Gurus on May 12, 2021. Previous signs by IronException and l_amp were present at the border upon arrival.[1] The 0z Way to the +X was completed by the +X Nether Border Diggers on June 22, 2021. 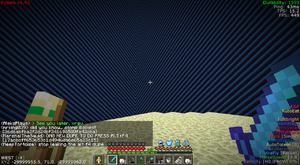 The first screenshot of the World Border Corner in the End Dimension, taken by Armorsmith.

Retrieved from "https://2b2t.miraheze.org/w/index.php?title=World_Border&oldid=65521"
Category:
Cookies help us deliver our services. By using our services, you agree to our use of cookies.