The Watchmen are a disbanded faction that is mostly known for constructing the obsidian ‘OwO’ at spawn.

The Watchmen was founded by beast_machine and NeoPaladin. The group was originally set up as a building group but it would eventually construct a giant obsidian spawn symbol called the 'OwO'. [1] After Fit released a video on the Obsidian OwO, a conflict between the Highway Workers Union and the Watchmen would ensue. They would argue about territory over spawn bases and members grew angry at each other. On March 7th, two videos were released by oofplux and Sand_Turtle that showed them griefing the OwO with withers, as the OwO had been built mostly at y level 255, with some parts still being at y level 256. They used a technique utilizing packet fly to also grief the parts of the structure built at 256.[2][3][4] These videos received 2.6K and 2.1K views respectively garnering a lot of attention from the wider 2b2t community and cultivated an unsmart persona around their main leader, beast_machine. They were coincidentally both HWU members and this lead to a misunderstanding within the Watchmen high command where they made the decision to clog highways to attack the HWU. Highways among the 2b2t players usually unify people as it is the main method of transportation, so this project would cultivate a strong dislike of the group among the community. The group was disbanded after their attempts to make a large Rick Astley obsidian sky logo were thwarted d the Air Destroyers. The Air Destroyers were originally founded by cityboss1 and maksitaxi, but more people joined after the original skirmish between c0mmie and the Watchmen members at the site of the Rick Astley including pvpers and people including oofplux, bowfag, OrbOfWater, MCAV Connor, Steve3 and mahan and romtec later on. Many of the people in this group were part of the Watchmen and decided they didn't want to do the logo so they aided the Air Destroyers by insiding. Poor leadership and mediocre to unskilled levels of pvping against the Air Destroyers who were more established on the server lead to lots of gear being lost and progress being halted on the project for a week. After this, Steve3, mahan, and oofplux used a new coordinate exploit exclusive to the Brownmen to find multiple regear obsidian stashes around the build site. They blew these up and the Watchmen lost a huge part of their supply and motivation. After constantly having their outposts raided and many of their members being killed, beast_machine quit the group after raging in the general chat of the Rick Astley discord where he doxxed himself and gave NeoPaladin ownership of the Watchmen. NeoPaladin didn't want to be in charge of the group, so he cancelled the Rick Astley sky logo and archived the Watchmen server. [5][6] On June 13th, NeoPaladin sold the discord to MortalVeteran16 for $20. Scott, one of the builders of the OwO also released information that the OwO was in fact only around 400-500K obsidian, and they made all the map renders artificially although this information is debated. Scott was one of the main people leading to the disbandment of the Watchmen after being unfairly banned, providing information to many people seeking to disrupt the rick astley project and insiding the group with unloyal watchmen members.

Aura was one of the first spawn bases the group set up to gather players. 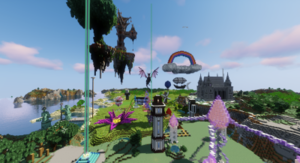 Render of Aura, a Watchmen spawn base.

Retrieved from "https://2b2t.miraheze.org/w/index.php?title=Watchmen&oldid=65654"
Categories:
Cookies help us deliver our services. By using our services, you agree to our use of cookies.