Imperator's Base, usually shortened to Imp's Base and also known as Viking Base and the Ungriefable Base, is one of the largest bases in 2b2t, built by Imperator's group in 2012. It was home to the most well known build on 2b2t, the Jesus Statue, and was griefed by jared2013 in 2015.

Building in Imperator's Base
Note: Most of this information is taken from a post on 2b2t.online by jared2013, who was responsible for griefing the base. 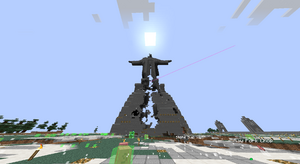 Retrieved from "https://2b2t.miraheze.org/w/index.php?title=Imperator%27s_Base&oldid=50535"
Categories:
Cookies help us deliver our services. By using our services, you agree to our use of cookies.