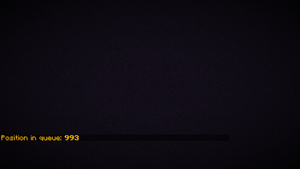 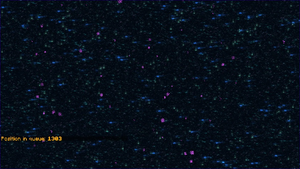 How the old queue looked in-game

The queue is a proxy server used to connect to the main 2b2t server. It serves as a queuing system for housing players wishing to join 2b2t when it exceeds its capacity. The queue was initially created during June 2016 to manage the enormous flood of players brought on by the arrival of TheCampingRusher and the subsequent Rusher War. The queue (and total players online) can be monitored on 2b2t.io with a graph that updates every two-three minutes. The queue is subject to massive influxes, such as the Mass queue influx of 2020. It should be noted that there are two types of queue, one with premium access, and a former addition that has since been removed (see System for more). 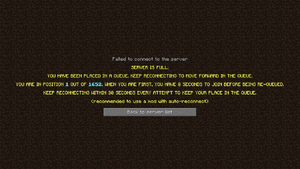 On June 1, 2016, a popular Minecraft YouTuber known as TheCampingRusher uploaded his first 2b2t video. This caused a massive rush to the server as hundreds of his fans attempted to join at once. This wave prompted Hause to implement a queue system to keep the server systems afloat. The queue was added in mid-June 2016 and required the player to continuously reconnect every few seconds, thus encouraging the use of hacked clients with AutoReconnect. Rusher then offered to buy 2b2t from Hause. Hause declined and Rusher suggested a new queue system. Within this system, all players that joined before June 1st, 2016 were given priority over the newer players. This would enable them to join in minutes rather than hours. A paid priority system was also added where a player could buy priority for $20 per month. The money raised would go towards maintaining the server costs. This and the basic queue is the system that is still used to this day.

During the early days of this new queue, players could be kicked for AFK and were forced to stay on their computer and to check every once in a while in order not to get kicked. This has been fixed in later updates and restarts from the server.

A major change to the queue later came on December 4, 2017, when Hause removed the veteran queue system. This change was not popular with the community and caused many oldfags to quit. According to Curtis, the owner of the queue proxy server, it was "100% Hause's idea". The queue now only has a basic queue and a priority queue to this day. At VidCon, Fit confirmed, when he met Rusher, that Rusher and his fags were still getting a cut of the queue as of July 2017. It is unknown and unlikely, however, that they still receive a cut, as the Archon has been sold off to new ownership in April 2018, therefore returning the queue server to Hause. The server now has players looking at the void in the End, unlike Rusher's, which had players looking at end portal blocks, showing a clear sign of change.

During large amounts of players joining the server, such as during incursions, or an invasion of the server by a popular YouTuber, the queue can get very long. In addition to English speaking YouTubers, a recent influx of Taiwanese YouTube Videos in the late summer of 2019 led to the queue to be nearly equally as long during the midnight of EST as the Afternoon of EST, due to opposing time zones. In addition to YouTubers from Taiwan, content creators from Israel, Turkey, Spain, France, and Russia also came to the server.

Due to the COVID-19 pandemic as well as many other current world events, the queue has spiked recently as much to over 1200. YouTubers are also invading 2b2t from across the globe and bringing hundreds upon thousands of fans with them (you can see the 7 main ones on the Republic Radio News' video on illegal queue, which also went into detail on many groups experimenting with ways to drastically effect the servers player count and "break" the queue system via complex technical affects to the server). 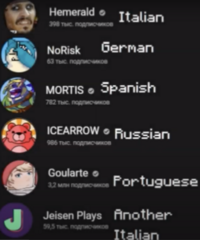 A count of major 2b2t YouTubers across the globe that invaded 2b2t. The result caused the queue spike to never before seen numbers, as well as general interest in 2b2t to increase.

There are currently two types of queue membership. There was formerly an additional queue.

The basic queue is the queue that all players are given unless they pay for the priority queue. A lot of the players in the queue are "newfags". It is the lowest level of priority, it is also the largest. When the veteran queue still existed, the position for basic queue players would increase due to the higher queue levels' reserved slots.

The priority queue, also known as the prio queue or paid queue, has the highest levels of priority, they have reserved slots which allows them to enter the main server easily. This is given to any player that pays $20 for monthly access.

The Veteran Queue was given to all players that joined before June 1, 2016. This queue was removed on December 4, 2017, because it was no longer relevant, as it had been so long since The Rusher War. The queue was a system requested by old players during the height of the Rusher War. It was a standard non-reserved queue, but they were ahead of all the queue members.

Fit and Jared2013 were believed to have admin access to the queue server. They abused this by giving HermeticLock and several members from the Spawn Masons access to the Veteran (Pre-Rusher) player Queue.

The queue was situated on a server of The Archon. It is an empty end dimension that puts the player in spectator mode. The server is no longer managed on the Archon and is now owned by Hausemaster.

The queue is a very controversial subject on 2b2t for a variety of reasons. One of the major reasons is that Rusher uses the queue as a way of milking the server for money. Rusher has shown that he can add or remove anyone from the veteran queue list, which he did with Torogadude. This action was later reversed and Rusher promised never to do this again. Rusher denies that he created the priority queue system just for money as many people had emailed Hausemaster beforehand, asking if they could buy queue priority.

The queue can be a few hours long at peak hours, effectively rendering 2b2t a pay-to-play server for new players. This also spawns a lot of hate for 2b2t YouTubers such as FitMC, who bring their subscribers to the server and increase the queue times for regular players. Some even say that Fit has a deal with Rusher where he brings his fans to the server in order to increase the number of people buying priority queue, however, this is little more than speculation.

The existence of reserved slots for paid priority players is a controversial topic as this means a queue can exist even when the server isn't completely full. This raises questions that the queue actually has little to do with lag prevention as the server could easily accommodate more players.

In a video by Toro, he has talked about why the queue will most likely never be removed. He claimed Hause is continuing to use the queue to make enough money to spend on the server. It's paying his bill and so would lead to why he will continue to keep it. It only takes 13 donators to pay off the $250 fees, 5 to pay for the general payment of $90, that is required to pay off for the server each month. It is unknown how much money is given to Rusher from this and Toro criticized in the video that Rusher never talked about the fate of the money he gains from the server since his drama video about #FreeToro and the queue itself.

This is a new, ongoing graph set up that will (manually) track how long the queue is. This is for testing purposes of the community and to see how the queue expands/shrinks due to events. Anyone may participate. All times are in EST, use daylight savings, and are following a 12-hour clock (AM/PM). If you live outside of the USA Eastern Standard Timezone, please convert your time to the EST format. 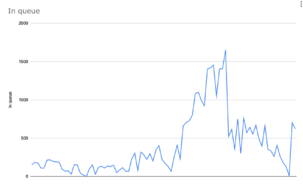 Players that have purchased priority queue are invited to enter priority queue status data in this category. All times are in EST, use daylight savings, and are following a 12-hour clock (AM/PM). If you live outside of the USA Eastern Standard Timezone, please convert your time to the EST format.

Retrieved from "https://2b2t.miraheze.org/w/index.php?title=Queue&oldid=51624#Veteran_Queue_(removed)"
Category:
Cookies help us deliver our services. By using our services, you agree to our use of cookies.