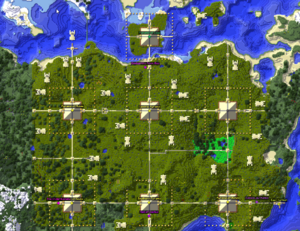 A JourneyMap render of the Valley of Wheat

The Valley of Wheat was the largest known sanctuary ever to exist on 2b2t. The wheat covered almost every block of grass around the area, spanning over one thousand blocks from end to end in places. In addition, the Valley also contained many Ancient Egypt-style structures such as large pyramids, pillars, and sphinxes, built using sandstone and netherrack. It is currently thought to be the most griefed landmark.

The Valley of Wheat was built by Jaang, a player who did not really like to interact with other players. Jaang was the sole builder of the entire sanctuary. He spent his entire time on 2b2t building and expanding the Valley in both of its constructional phases (2011–2012 and late 2013–2014). To gather more players to visit his Valley, Jaang built a pyramid in The Nether, which would lead players through a portal and into the Valley of Wheat. Jaang let players take food from the Valley but never allowed them to build in it.

During a trip through the Nether, Jaang was attacked by another player but was saved by Offtopia, who was one of the only players Jaang ever interacted with. Offtopia would give Jaang gifts and would protect the Valley of Wheat at all costs, killing anyone who did not replant the wheat. Offtopia also invited other known players to the Valley, such as; xcc2, passie05, zxcwbz1, and others. They all helped replant and remove any minor damage, such as lavacasts and TNT craters. Offtopia would continue to defend the Valley, with "tooth and nail" according to Fit, up until the Rusher invasion.

The base's existence was nearly universally respected, no one would destroy the base. Even popbob once killed Jaang in The Valley, but did not grief it. One of the most notorious griefs on the Valley of Wheat (before the Rusher War) was committed by an oldfag known as IMBJR. The Valley was eventually restored by xcc2, Offtopia, and others. However, the destruction following IMBJR's grief caused Jaang to leave 2b2t. Eventually, xcc2 and others left in early 2016, leaving Offtopia to defend The Valley. Despite these events, many other nonaligned players contributed to restoring the Valley. 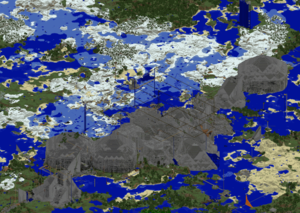 A Render of the Valley of Wheat from 2018

Today, the Valley of Wheat is severely griefed due to people with 11/11 dupe items. Most of the original structures and wheat have been destroyed or covered with lavacasts and withers. However, some people still return to the Valley of Wheat to repair portions of the damage.

Retrieved from "https://2b2t.miraheze.org/w/index.php?title=Valley_of_Wheat&oldid=49995"
Categories:
Cookies help us deliver our services. By using our services, you agree to our use of cookies.