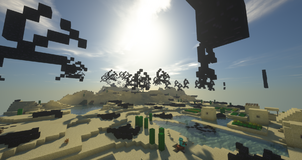 The Valley Of Armorsmith

The Valley of Armorsmith is a significant public landmark built in 2018 near the 1 Million milestone on the X+ Highway. It is located on the -4444 Highway exactly 1 Million blocks away from Spawn. It is known as one of the largest structures by Armorsmith's Followers on 2b2t.

The Valley of Armorsmith was inspired by the Valley of Furnaces, which contained a vast amount of Ender Chests at the time. The players RusherFag and aominee thought of the idea while travelling on the -4444 Highway, and this time, instead of spamming Ender Chests, Armorsmith-themed structures would be created. Newfags at Spawn were used to mine Ender Chests for Obsidian, and several players from Armorsmith's Followers contributed to the project. 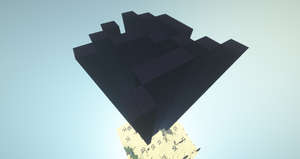 At the time, the location of the Valley on the -4444 Highway was occupied by a small and insignificant ruined town. The town was demolished, and the entire desert biome around it was transformed into what would become one of the largest single map-transformations on 2b2t. The Valley occupied the entire desert upon its completion, and its coordinates went public in November 15th, 2018. Despite the high-traffic location of the valley, thanks to the structures within it and the way they are built and spread, the valley remained almost intact up until today with minor griefs done by Withers mainly to the 1 Million Hammer And Sickle tower.

The valley is spread throughout the entire desert. The main feature of the Valley of Armorsmith is the hammer and sickle, which is spammed all over it in different sizes, shapes and forms. The exact amount of hammers and sickles around the valley is unknown, probably thousands if not tens of thousands. Some of them are built vertically in the air while others are attached to the ground horizontally. Some of the hammers and sickles are bigger than others, with a single pixel being made out of 16 Obsidian blocks.

In addition to hammers and sickles, the valley also has several "Armorsmith" Obsidian signs featuring his name, again, some are bigger than others. Messages around the Valley calling to praise Armorsmith are also present. The Valley cuts through naturally generated villages and desert temples. The main feature at the center of the valley is the Hammer And Sickle Tower, located exactly 1 Million blocks away from Spawn. 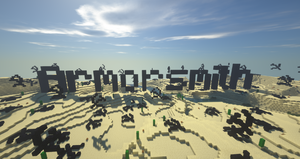 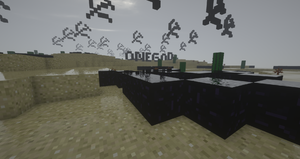 Thundery Weather within the Valley.

It is assumed that the amount of hammers and sickles within the valley can rival the number of Vortex Coalition logos at Spawn, and can certainly surpass, outmatch and outnumber the amount of symbols built by groups such as the Infinity Incursion and the Emperium at Spawn.

Video about the Valley of Armorsmith by Armorsmith's Followers - https://www.youtube.com/watch?v=XW7U884g9eM&ab_channel=Armorsmith%27sFollowers

Retrieved from "https://2b2t.miraheze.org/w/index.php?title=Valley_of_Armorsmith&oldid=61678"
Category:
Cookies help us deliver our services. By using our services, you agree to our use of cookies.