This page is about the base created in 2013. For the group of the same name that inhabited this base, see Valkyria

Valkyria was the first base created by the group of the same name. It was one of the largest and richest bases of its time and would go on to become one of the most famous of 2b2t's early bases for both the group's and base's prominence in 2b2t.

During a temp map in April of 2013, Sato86 and the Black Flag Group (Pyrobyte, Drewbookman, and Angry_baby) met with hinderjd and his basemates from Hitlerwood (Coldwave, zach3397, and KnightVista). During the chaos that was the temp map, Sato proposed the creation of a new base by both groups. After deciding on a location, the two groups began constructing the base. Multiple names were kicked around for a while, including The Facepunch Reich and Niggertown, before Sato finally decided on a name; Valkyria, inspired by the angels of Norse mythology that transported dying warriors to the afterlife.[1]

"The Reich", located only 2000 blocks from Valkyria

As time went on, more and more players joined the base and it became the largest group base on the server at the time. However, ever since an abandoned base known as “The Reich” was found only a few thousand blocks from Valkyria, many of the members were worried that the existence of Valkyria could be uncovered, and took extra precautions to cover their tracks when travelling to and from the base.[2]

After kinorana, a new member of Valkyria, had pranked the base members by taking a world download of the base and griefing it, then showing screenshots of this world download to the base members, Sato began to have second thoughts about inviting him, although he did forgive Kino after he apologized. This all changed when Kino taught the members of Valkyria how to dupe, and the future of the base looked bright. However, a rivalry began between Kino and Drew, who grew more distant from Sato and Pyrobyte as they became better friends with Kino. Drew also began acting strange, and he set random parts of the base on fire and blamed it on lightning on three separate occasions, despite the fact that the damage was too great to be from a lightning strike, which would have quickly been put out by the rain. Drew was also accused of stealing a set of armor. Despite these incidents, Sato still trusted Drew because he was the first basemate Sato ever had on 2b2t, and they had been through a lot together.

Soon after this, the First Incursion was started by members of Valkyria, and they organized 2k2k as a sort of meetup spot. While there, they met a player named trodam, who didn’t try to attack them. Drew instantly attacked and killed him, burning his stuff on the spot. After this incident, Sato had finally had enough, and Drew left the group. The Valkyrians created a small farm at 2k2k with a beacon and logged out. Soon afterwards, a player named BAHSAHKAH killed trodam and stole the beacon. Sato logged on and, along with Pyro, chased BAHSAHKAH into the nether, but he escaped. Later, after Pyro had logged out, BAHSAHKAH returned and fought Sato, who lost the fight partially due to a bad internet connection. Despite losing, Sato still considered this to be an “enjoyable fight”. As it turned out, BAHSAHKAH was the alt of Jacktherippa, who soon became friends with Sato.

After the First Incursion ended, Sato returned to Anatolia to expand the base. While Sato was away, Drew spawned five withers at Valkyria and used TNT to grief more of the base. Coldwave and hinderjd, who were still at Valkyria, killed four of the withers and tried to figure out who was responsible. Sato instantly suspected that Drew was the culprit, and talked to him in chat. Drew told Sato that he wanted to spread paranoia among the members of Valkyria and cause them to split up, returning the balance of power on the server to “the way it was before''. Drew had made a grave mistake, however; he had given his coordinates to hinderjd before confessing. Hinder, Coldwave and Zach tracked Drew down to his dupe stash and killed him while burning down the stash. Later, Sato returned to Valkyria and, in a moment of anger, killed the final wither that Drew had spawned at the base and used its nether star to craft a beacon that he left at the ruins. Sato never thought that he would return to the site of Valkyria again after this.[3] 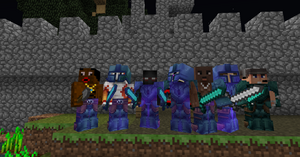 Many of the original inhabitants of Valkyria

Some time after the Second Incursion, Sato and Pyrobyte met up with Jacktherippa and told him about what had happened to Valkyria. Jack suggested that since Drew hadn’t actually leaked the coords to the base, they could go and restore it. Sato agreed, and they traveled back to Valkyria. The base wasn’t as badly griefed as they had expected, and they got to work rebuilding. Other former basemates returned to Valkyria to help as the project progressed, as well as players who didn’t originally base at Valkyria, such as xcc2 and THEJudgeHolden. Drewbookman also returned to the server around this time, but he couldn't remember Valkyria’s exact coordinates. Eventually, though, he remembered the coords, and on top of this, someone at Valkyria gave the coords to popbob. This caused the reconstruction project to fall apart, and the players that were at Valkyria split up.

In 2014, after returning from the April Fools map, Jacktherippa got bored at his own base, The Lands, and decided to travel on the Nether roof back to Valkyria. When he got there, he realized that, once again, the base wasn’t in as bad a condition as he had thought. Jack decided to stay at the ruins, only being visited occasionally by Pyrobyte. One day, Jack saw a player named McBrainbomb wandering around the ruins, and killed him. However, McBrainbomb turned to be the alt of a player named Javazon, who gave Valkyria’s coordinates to OreMonger, whose base had recently been griefed by Jack and a few others. OreMonger traveled to Valkyria and griefed it beyond repair, causing Jack to leave and return to The Lands.[4] 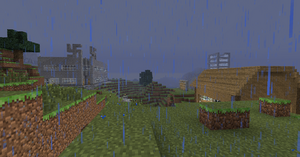 An early screenshot of Valkyria. The stone building with swastikas was built by hinderjd.

The first major build at Valkyria was a central building with swastikas on top, courtesy of hinderjd. Sato also built his house next to this building. As more players showed up, Sato decided to build a stone wall to define the boundaries of the base and make it so that the builds were more concentrated. Sirms built the tallest building at the base, a tower that resembled a lighthouse, while Drew built a triple layer farm that provided food for the whole base. Around this time, the first ever Valkyrian Eagle was constructed near the ocean out of black wool.[2] Eventually, the base became too crowded and builds began to be constructed outside of the city walls. 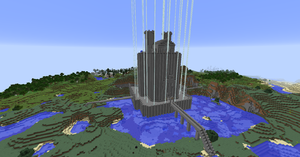 A massive swastika covered in vines was built over the ocean next to a flying pirate ship built by Fuzzypuffball. The Autism Spectrum Church was constructed just outside the main walls, and contained shrines to many famous players. Nearby was the Asset Forfeiture Tower, a tower by thePOMPANO and fubster that was completely made up of blocks taken from spawn stashes. Sato built two large fortresses at Valkyria; Fenris Stronghold and Valkyria Fortress. Other major builds included an underwater dome, a memorial created on top of the hole created by Drew’s last wither, a replica of fubster’s Spawn Beacon used in the Second Incursion, and KnightVista’s house.

A few thousand blocks away from the main base, the Valkyrian Council was built. It was a massive stone structure reminiscent of Anatolia surrounded by beacons, with a large Valkyrian eagle made of stone brick above the entrance. On top of this tower was a small castle that featured seats for 16 players and an eagle pattern on the floor. 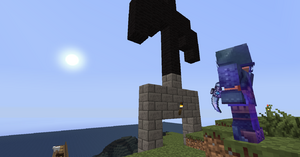 The first Valkyrian Eagle ever built, created near the ocean at Valkyria
Retrieved from "https://2b2t.miraheze.org/w/index.php?title=Valkyria_(Base)&oldid=49985"
Categories:
Cookies help us deliver our services. By using our services, you agree to our use of cookies.