Torogadude, nicknamed Toro, is a notable midfag on 2b2t who is most known for the #FreeToro crisis during the Rusher War and for his YouTube channel that has several informative videos on 2b2t. He said that he would continue to upload 2b2t on his channel but would not go on "the youtube grind," and he had a great impact on the server when he was playing.

Torogadude first joined 2b on November 23rd, 2015. He started out on 2b as any other player did on 2b by collecting resources and creating small bases. He started to be known a lot more as he began to interact with other older players, such as Fit.

During the war, Toro got himself involved with the 4th Reich and Team Veteran. He would do what all other Vets did, which was kill and destroy Rusher's and their bases.

Torogadude began to gain recognition on the server when he started to expose TheCampingRusher for the jew he was after his veteran queue was revoked after he triggered one of the Queue admins. This caused a large backlash against Rusher under the name #FreeToro. His priority queue was later restored after Rusher caved into the pressure from the community.

After the war, Torogadude began to focus more on his channel. Eventually, he started several live streams related to 2b2t and built a base in the End called the Death Star II. However, he died during the construction when he accidentally left his player in AFK mode and it looked at an enderman, which later killed him. Toro later returned to the Death Star II and continued construction.

In the time between Toro dying at the Death Star II and returning to it, he started a new project called Toro's Theater, an underground European-style theater build, in the meantime. He also joined Team Pepsi at this time when the 4th Reich disbanded and has been a member since. He joined due to influence from other Pepsi members in his discord. Toro predicted that TheCampingRusher had a 40% chance of returning to the server in the summer of 2017. However, several oldfags, such as Fit, has stated that he won't come back at all. It has been confirmed that Rusher did not return on June 1st, 2017.

In March of 2018, Torogadude announced that he no longer would be making 2b2t Minecraft content on his channel. This was long expected, as he had been suggesting his 2b2t viewers go and watch his other, more interesting, non-2b2t content. He still says he would keep in touch with the people of the server and has been seen on the subreddit since. 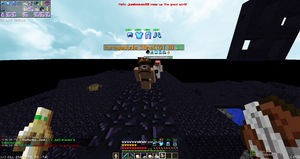 Torogadude on the server before his Nov. 2020 livestream

Torogadude livestreamed on 2b2t on November 23rd, 2020 and stated that he would be back every six months for a 2b2t stream.

Past Role on the Server

Torogadude ran a youtube channel by the same name. He was a commentator on 2b2t's events, explaining the various dupes, exploits, and other things related to 2b. He was well known for streaming his (now griefed) Death Star II in the End and also used to do several other livestream series on 2b2t, such as the 2b2t Podcast, A walk on 2b2t, The Hunt, etc.. He had about 11.5k subscribers on his channel at its peak but has slowly been declining in views and subscribers since he quit making 2b2t videos on his channel, therefore he has little relevance on the server any longer.

Retrieved from "https://2b2t.miraheze.org/w/index.php?title=Torogadude&oldid=56861"
Categories:
Cookies help us deliver our services. By using our services, you agree to our use of cookies.