The Third Incursion occurred in May 2015. It started on the 28th of April, 2015, two years after the founding of Valkyria. This Incursion was also known for several exploits used, such as infinite blocks and mob spawning.

On April 28th, 2015, Sato86 announced the Third Incursion, an incursion made to vent the Valkyrians' anger about the leaking of Asgard 2. 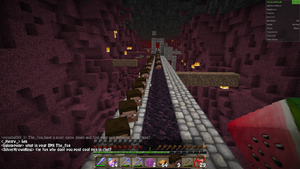 Incursion member travelling towards Spawn a day before the incursion officially started.

A volunteer base was made near spawn around a stone brick and water build made by Bammerbeast. It consisted of castles made of duped items like emerald blocks. However, in the timespawn of April 30th to May 5th, Volunteer Base was destroyed and the members started to focus on making 7 spawn bases, each representing the 7 deadly sins. But one of the spawn bases, Wrath Outpost, looked so good that the entire incursion started focusing on that single base. The incursion used leftovers from previous dupes and infinite items to bring them the obsidian they need. A bedrock block was also placed in the middle of the outpost. A melon fort is also constructed by Kaorukun around May 6th to 8th. 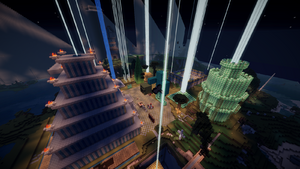 Volunteer Base on April 30th

Around mid-May 2015, the outpost was completed. For the next few weeks, newfags and players who tried to stop the Third Incursion were killed. Even players such as Popbob were forced to combat log. By the end, the incursion was a humongous success. A few players such as Fit stayed at spawn for the next couple weeks, but they eventually left.

Retrieved from "https://2b2t.miraheze.org/w/index.php?title=Third_Incursion&oldid=62026"
Categories:
Cookies help us deliver our services. By using our services, you agree to our use of cookies.