The Wrath of Armorsmith

The Wrath of Armorsmith or Armorsmith's Wrath was a wrath created by Armorsmith and his followers. It was created following Armorsmith's griefing of the Old Spawn Road to make a symbol of themselves at spawn and griefed throughout the sixth incursion.

The Old Spawn Road was a 4-year-old road when Armorsmith had griefed it in 2018. From there, construction began on -3500 X, 300 Z, the coordinates of the start of the Old Spawn Road.

IHackedWalmart supplied the group with echests while Armorsmith, Metrez and Pheanom worked on the wrath. It was created in a double-chunk and also used some obsidian from Wrath Outpost.

You can see multiple renders of the Wrath as well as a real-time video of it here. 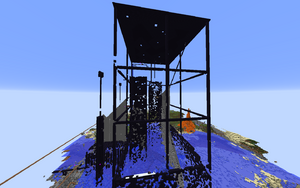 Armorsmith's Wrath in September of 2018
Retrieved from "https://2b2t.miraheze.org/w/index.php?title=The_Wrath_of_Armorsmith&oldid=50148"
Categories:
Cookies help us deliver our services. By using our services, you agree to our use of cookies.