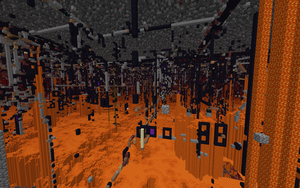 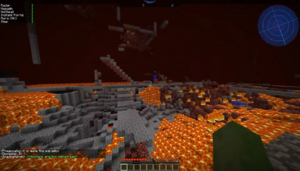 The Nether is one of the three dimensions in Minecraft alongside the Overworld and the End. It is accessed by using a Nether portal, which are often seen around 2b2t's spawn abandoned or disabled. Because one block length in the Nether is eight blocks in the overworld, players use the Nether's highways as a main source of travel.

The spawn of the 2b2t's Nether is a large chasm of floating bridges and pillars of various blocks. Most blocks have been completely obliterated from the bedrock roof to the bedrock floor. The bottom is filled with several lava lakes and has a population of withers on the bedrock surface. The vast majority of activity and development occurs just beneath the roof, because tunnels built at the top of the Nether cannot be flooded with lava from above. A large platform made mostly from obsidian is usually located at the middle of the Nether spawn, which periodically gets damaged, repaired and added on to by various players and groups. Players are often present, often to kill other players that try to pass through.

Four highways extend outwards along the x and z axes towards the world border. Closer to spawn, they are very large tunnels with elevated platforms made from a wide variety of different block types, mostly obsidian, running through them. This is due to players using explosives and creating withers within them, which has widened them over the years. For most of their regularly travelled lengths, they are 2 blocks wide and 3 blocks tall, just the right size to ride a horse through. At extreme distances, they become only 1 block wide and 2 blocks tall, so players need to go on foot or ride a pig or boat instead. All of the 4 highways reach the world border, thanks to the good work done by the Diggers. A tunnel that extends 30,000,000 blocks through the Nether to the Nether world border has yet to be built, but a few have ventured out over 10,000,000 blocks, like R2bEEaton and Jordanl666.

The Nether is an ideal place for people who want to travel due to the Minecraft mechanic where one block in the Nether equates to eight blocks in the overworld. Portals to the Nether are also used for gold farms, in which players create large Nether portals in order for zombie pigmen to emerge from them and fall into a machine that kills them. It is also used for its regular Minecraft purposes such as mining or farming for soul sand, Nether bricks, Nether quartz, magma blocks, Ghast tears, Nether wart, Blaze rods, magma cream, and sometimes even for Netherrack. Wither skulls are not generally farmed for since they have been duped thousands of times and Wither Skeletons barely spawn, if at all, due to 2b2t's bad mob spawn rate.

One of the main disadvantages of 2b2t's age is the difficulty of obtaining Nether items. Because the server is so old and so thoroughly explored, you have to go really, really far out to find Nether fortresses, which only generated after 1.0, and even farther out to find Netherquartz, which only generated after 1.5. Naturally generated magma blocks, added in 1.10, are even harder to find, but fortunately, they can be crafted with magma cream, and generate naturally in the underwater trenches in the overworld [that will be] added in 1.13. Netherwart can be farmed anywhere and so is easily obtained, but blaze rods are a different story. And the low spawn rates of ghasts and magma cubes makes getting ghast tears and magma cream more difficult than normal (but not impossible). Of course, wither skulls are almost completely impossible to obtain, even more so than normal, and so players are better off getting them from someone else than trying to get them themselves. Red and Brown mushrooms also generate in the nether, providing a useful supply of food in a pinch.

One of the most common and major issues that Hausemaster had to deal with over the years was access to the Nether roof. There have been several glitches, exploits, and hacked clients that have allowed players to access the top of the bedrock roof of the Nether over the years. Players would use the Nether roof as a place to build stuff that would be inaccessible to most other players (including, in the early days, one of the first duping machines ever built on the server), and they would also use it to travel long distances through the Nether very easily along the entirely flat and featureless bedrock ceiling, rather than having to go to the trouble of tunneling through the Nether proper. This was exploited by players who abused the flatness of the Nether roof and use hacked clients to run extremely fast through the Nether and load copious amounts of chunks in order to seriously lag the server. This eventually prompted Hausemaster to close the Nether's rooftop entirely by installing a plugin that would teleport anyone who got above level 127 back down below the roof.

When in the Nether most players will KOS and crystal pvp, 0,0 Nether is known for fights to break out and is generally advised to avoid when making your ways onto the highways. Another danger is the huge chasms and lava lakes close to the ground making one wrong step death. Withers are also very dangerous and sometimes seen in the Nether. Lastly, portal trapping; portal trapping is a method of trapping players by placing obsidian around a Nether portal which makes it difficult for players with no teleportation or pickaxes to escape them, they are escapable by using some hacks or just breaking the obsidian with hands which take 4 minutes.

Retrieved from "https://2b2t.miraheze.org/w/index.php?title=Nether&oldid=56555"
Categories:
Cookies help us deliver our services. By using our services, you agree to our use of cookies.