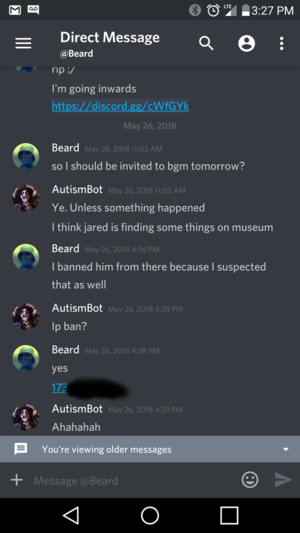 After Fit griefed Summermelon in July of 2017, he claimed that he griefed the base because tomah54460, the owner of the Museum, was basing there with Offtopia, and tomah had leaked Fit's base Rocket Town. However, tomah was never a member of Summermelon and did not have coordinates to the base, causing speculation that Fit had other motives. In response to this grief, the Museum admins removed Rocket Town from the Museum, although it was re-added sometime later.

Almost a year after the Summermelon drama, the second scandal to plague The Museum was the BoeMeccan Witch Trials. In late May 2017, near the end of jared2013's Month of Destruction, the Boedecken was griefed. On June 1st, 2017, the day after the finale of the Month of Destruction, Block Game Mecca was griefed. Initially, it was thought that jared2013 had griefed both bases, but he denied responsibility. Once an investigation was launched, many suspicious facts lead the members of both bases to suspect that Beardler, who was an admin on The Museum, was responsible for both griefs. However, it could not be proven that he had griefed the bases. The Museum staff defended Beardler and the members of Block Game Mecca and The Boedecken apologized for the accusations. Soon after, however, AlphaComputer and AutismBot was able to gain admin access on the Museum server.

They created a fake base that never existed on 2b2t, and placed a sign a bedrock level containing NTB data that, when executed, would give him admin access to the Museum server. Once the base was added to The Museum, they able to use the sign to gain access to the server. When they did this they discovered that there was a hidden section of the Museum for bases not ready to be put on display, which included Block Game Mecca and The Boedecken. The Block Game Mecca world download contained a book titled "I'm Gay", which was originally part of the Boedecken library and not Block Game Mecca. This book was at both bases, and the only other player besides YellowstoneJoe (who had nothing suspicious about him) to be at both bases was Beardler. This proved that Beardler was responsible and used his reputation as a Museum admin to gain access to both bases, which he then stole historical items from and griefed both bases to cover it up.

Beardler would later admit this, and it would also be revealed that he leaked jared2013's IP address to AutismBot, proving Fit's accusation of Museum admins logging player's IP addresses. Fit then made a video on the drama, which caused many players to avoid the Museum.[1] This scandal forever ruined the Museum's reputation, and it would later shut down in 2019 due to lack of people joining it. However, an unrelated server called The Archive would take its place later that year.

Retrieved from "https://2b2t.miraheze.org/w/index.php?title=The_Museum&oldid=63571"
Categories:
Cookies help us deliver our services. By using our services, you agree to our use of cookies.