The Lands of Norphs and Niggers, also known simply as The Lands, was a base founded by Jacktherippa. It lasted for years due to its distance from spawn.

Jack created one of the server’s first beacon arrays at his new base shortly after the server updated to 1.4. He lived alone at this base for months until December 2012, when he was contacted by SnackyNorph, who had just lost his famous library and was now homeless. Snacky asked if he could join Jack at his new base, and Jack accepted. When Snacky arrived at the base, he brought ExaltedSpartan, xarviar, stupidwalrus and AWarGuy with him. Snacky would also give the base a name; “The Lands of Norphs and Niggers”, usually shortened to just “The Lands”. Due to the sheer amount of time it took to travel to the base, new arrivals came in waves. A second wave of players in October 2013 included kinorana, Branillon, Parthicus, thePOMPANO and fubster.

Over time, many of the residents of The Lands got bored and /killed their way back to spawn. One day, Jack was using a teleportation exploit known as STP, which ended up sending him to spawn and making him unable to return to The Lands. Soon afterwards, Jack joined the third incursion and, between the incursion and staying at Valkyria, didn’t return to The Lands for a while. When he did, he used an exploit to ride horses on the Nether roof, since the roof was now supposed to be inaccessible. Even with this exploit, it still took him four days of riding to reach The Lands again.[2]

Many players visited The Lands over time, including xcc2, SilverKrownKing, CainesLaw, and OreMonger. TheCampingRusher was even given a tour of the base by jared2013 after it was griefed, but was killed by Jack part of the way through.

The base coordinates were made public by Hausemaster after accidentally posting them in chat. Popbob on with his alt RadicalHiccup (now RIDF) traveled to The Lands and attempted to grief it, but failed and logged out. The Tyranny claims that during the Bed Exploit, popbob logged on and completed the chain to teleport to The Lands. However, it is more likely that the boat fly exploit was used, as players could use it to travel under the Nether at very high speeds. iTristan, who was a member of the base, knew that jared and taylo were coming, but didn’t tell anybody. Taylo, using a 32k sword from Tristan’s stash, killed all the members of The Lands that tried to stop him as he and jared griefed the base.

The Sky Temple of Autism 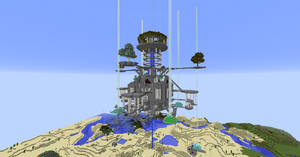 The Sky Temple of Autism

Jack began work on the temple in July 2013. The design was heavily influenced by a build on the Mindcrack server that was built by Zisteau called "The Lens”. The Lens was made of sandstone, but Jack decided to use stone brick and quartz for his build, as he felt it was easier on the eyes and stone brick was easier to obtain in large quantities. 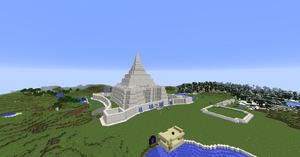 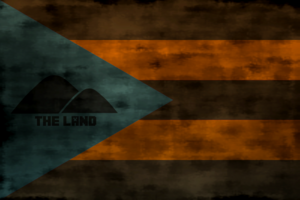 Flag made by Sato86

The Sky Temple of Autism featured small platforms connected to the main structure by iron bars, four beacons, and a stream of water running through it from top to bottom. It is made of stone brick and quartz, with accents of lapis blocks and glowstone used for lighting. The design of this build would greatly influence the design of Jack’s next major build, Space Valkyria.

After arriving at The Lands, SnackyNorph built his Tower of Autism on February 2, 2013. It was mostly made out of snow, and housed multiple farms and a storage area. A plane was built crashing into the tower by xarviar a year later, symbolizing 9/11. Snacky also built a cube shaped house next to the tower.

ExaltedSpartan built this after returning to The Lands with Jack following the third incursion. It was a large structure mostly out of quartz. The interior was never finished, and neither were the surrounding buildings. The name and design are based on the Taj Mahal.

When he first arrived at what would become The Lands, Jack walled off a desert village to protect it from mobs. Over time, he would transform and expand the village into the central area of the base. He converted the village blacksmith building into a multi-story house and created multiple farms surrounding it, including a gold farm that went down to bedrock, an iron farm, and multiple automatic crop farms.

A large pyramid of blue stained glass filled with water with a beacon in the center was built by Jack in early 2014.

Fubster and thePOMPANO built The 2b2t Fish and Wildlife Corps H.Q at the base after their arrival. It consisted of a small cabin with a secret “vault” made of rainbow wool containing a pink swastika underneath it.

fastvincent1’s video on The Lands

Rusher’s video of the base

Retrieved from "https://2b2t.miraheze.org/w/index.php?title=The_Lands&oldid=50895"
Categories:
Cookies help us deliver our services. By using our services, you agree to our use of cookies.