The Biome Donut, otherwise known as Jesus Donut or Christ's Biome Donut was a famous base built in mid 2019 by wakwak90, that was toured by Fit later that year 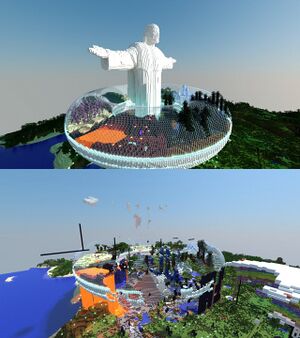 The before and after grief render

wakwak90 founded the base on May 11, 2019, and invited a few people to help him build. Unfortunately, none of them built very much and it was mainly a solo base for wakwak. He built some buildings in a small town, then began work on the large torus. He also built a Bin Laden mapart nearby in July. Once the Torus was completed, he felt it seemed empty and decided to put a Jesus statue in it.

Soon, wakwak grew bored of the base and decided to post a picture of it on Reddit so someone could come grief it with him, and he could move on to new projects. Only one person, MatteaMonster, coordinate exploited it and came to grief the build with him. It was destroyed on October 19th, 2019

A while after the griefed base was posted on the subreddit, Fit made a video on it, which has garnered over 1.7 million views (as of June 11th, 2020). Wakwak stated in an interview that Fit never even talked to wakwak before he made the video, and all the information in the video was directly from wakwak's Reddit post.

Retrieved from "https://2b2t.miraheze.org/w/index.php?title=The_Biome_Donut&oldid=50869"
Categories:
Cookies help us deliver our services. By using our services, you agree to our use of cookies.