From 2b2t Wiki
Jump to navigation Jump to search
Not to be confused with Gulag Spawn Camps.

The Gulag is a group founded by c0mmie_ in late 2018. The group has no set goals aside from having fun.

In late 2018, c0mmie_ and a few other players went out to create a few bases, starting what would become the Gulag.

In the early days of the Gulag, one of their first bases, The Wither Skull Road, was griefed by a group known as The Confederacy. After MinorityCatcher was accepted into the Gulag, he leaked the base's coordinates to Freedom2b2t and The Confederacy, and they would grief the base. Following this, the Gulag was able to get Finn_Fry to inside the Confederacy and leak many of their bases to the Gulag. The war would eventually cool down, as a few months later, when Conquest griefed The Confederacy's main dupe stash. After this Finn_Fry would betray the gulag and many other groups doing only minor damage to the group.

During The Interwar Period, the Gulag had very few enemies, and the enemies they did have were relatively unnotable. In this period, The Gulag became allies with groups such as Conquest, The Teutonic Order, and The Infinity Incursion, among others. 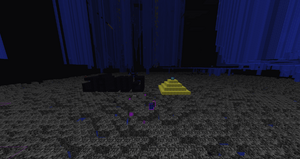 Conflicts with Watchmen began in February when c0mmie_ was told coords to an II event. In reality, this was a watchmen event and after a 20-minute fight, which can be seen here, ended in c0mmie's fight. After accepting the loss and moved on however, the Watchmen began to gloat about it which was annoying, so c0mmie waited for his revenge.

In late April c0mmie_ was invited to a GC that would later become the Anti-Watchmen, it turns out the Watchmen was planning to build another sky render, but this time as a Rickroll. A few hours after the anti-watchmen got coordinates to watchmen outpost, c0mmie_ began the assault killing over 12 Watchmen and destroying around 40k obsidian because of these attacks and many others, Beast_Machine would quit 2b2t and the Watchmen would disband leading to the end of this conflict.

After being allies for well over a year, Gulag members c0mmie_ and Frosty003 decided to nuke Team Rocket. They claim that gryxz had become increasingly self destructive and egotistical leading up to the events, with it being climaxed when iiGryxz leaked Frosty's plans to backdoor a hacked client. A few hours later c0mmie_ used his kick perms that he had to kick everyone in the discord as well as leak all chatlogs.

In 2021, The Gulag would go to war with the small group Mew Revolution. The war started with the Mew Revolution and Obscension fight-club event, now known as Pit Fight. The Gulag would go to every event and kill nearly everyone at the event and then griefing the arena. The war would officially come to an end when Gulag member, Frosty003, sent MrAllNet a file called Etikahack. The file would contain a token logger which would steal the users token allowing them to log in to your account without needed a password and bypassing 2fa. Following this Frosty would nuke the Mew Revolution discord server as well as leak private dms, which would lead to MrAllNet being doxxed.

The One year war with the Infinity Incursion (Infinilag war)

Beginning of the war

In August of 2020, c0mmie_ was talking about ways to get rid of YouTubers and removing FitMC from the Infinity Incursion with c0mmie_ being shortly kicked from the group. It is not confirmed but theorized by some that he was kicked for not liking FitMC and calling out the group leader. Commie and many other members of The Gulag, as well as their allies, felt betrayed and felt that the Infinity Incursion sold out, this started the Infinilag War.

The Anti Watercube Coalition, was formed to combat the Infinity Incursion. The Anti-Incursion was founded by c0mmie, gh_joey, 8nothing, and maksitaxi, who over the past year had become enemies with the Infinity Incursion due to various drama that had taken place. The group utilized large obsidian clogs in the watercubes path to prevent creation of watersources, the most effective being Obby Casts - large lava casts that were covered in obsidian. One of many of the Obby Casts created a spawn

In the current day, The Gulag hosts weekly events, the nature of which ranges from building to griefing events. The Gulag is currently

The Gulag has a YouTube Channel, where the group's content is posted. This includes The Gulag Report and The Gucast.

The Gulag Report was created by covfefe2020, as a satirical news source.

The Gucast was created by Frosty003 as a result of The Anarchy Podcast, a YouTube Podcast hosted by Fastvincent1, going inactive. the player decided to create The Gucast, which, like it's predecessor, has the goal of interviewing anyone possible and learning about their experience on 2b2t. 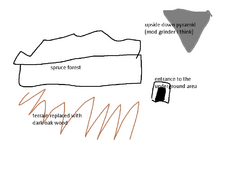 A very artistic sketch depicting what c0mmie_ remembers of China

China was the first base the Gulag would ever make, located roughly 100k out. However, while the base was under construction, a player by the name of SadieLee found it and started griefing. The Gulag would then fight SadieLee, making him log multiple times until a screenshot of the base was put on r/2b2t. The coordinates are sadly lost to time.

According to c0mmie_, the base had an unfinished underground section that was meant to become mined out and turned into the main area, similar to the Boedecken. He also claims that most dirt was replaced with birch wood and had an upside down pyramid.

The Wither Skull Road was the Gulags' second base. It was given its name after c0mmie_ tried to make a wither cage but failed. The base was one of the largest bases the Gulag ever made. It was griefed by the Confederacy, leading to the Gulag-Confederacy war.

c0mmiegrad is a large obsidian dome with a pyramid in the center. The base was first designed on a private server hosted by aternos.org and was then built on 2b2t. The base took around 1 hour to create, while the watercube took around 12 hours to make as the Gulag had to manually mine all of the ice they would need.

SGA - Close alliance, with the Gulag being one of the oldest groups in the alliance.

Teutonic Order - Inactive alliance as the groups don’t support each other as much as they used to.

TeamNoTrees - Close alliance as the Gulag sends supplies and people over.

Retrieved from "https://2b2t.miraheze.org/w/index.php?title=The_Gulag&oldid=61627"
Categories:
Cookies help us deliver our services. By using our services, you agree to our use of cookies.