The Fellowship of the Diamond

The Fellowship of the Diamond was is one of the oldest-known groups to be created on 2b2t. They tended to keep to themselves, many contemporaries allegedly did not even know the group existed. The group made several bases around spawn, most notably Tugboat Base. A few group members joined back for about a year starting in in March of 2015 after rediscovering 2b2t.

The Fellowship of the Diamond was founded by the players KillerCapybara, zhode, serphantking12, and _ironeagle_ when they logged into 2b2t. The first base they set up was called the "700 base" which was 700 blocks away from spawn. It didn't last long and because of that, they decided to move further away.

They made another base called "3000 base" that according to KillerCapybara "lasted us through September and part of October". After their base was found they packed their limited items and moved further away to a place they felt safe

During Mid-October they built the biggest base they ever built called "8000 base". It was an underground base with important things such as a central tree farm, animal pens, and a chest room. It also had some weird shit such as an art gallery, a strip club, and a church dedicated to a sheep that was said to have crashed the server. They had everything underground until they constructed a cobblestone castle outside of their base.

They all based together for a while until bickering boiled out into the group. Because of this, they came to a general agreement that they had to change some things to keep their group from falling apart. It was at this moment that they came up with the name, the "Fellowship of the Diamond", and the group split into fellowships with separate leaders but were still part of the same group and remained friendly with each other.

After the "8000" base, they made multiple other bases, but those bases were griefed shortly after their creation and before they knew it, "8000 base" had been griefed too. They moved on to their last base that was made on a mushroom biome, but by that point most of the members left due to boredom and shortly after zhode and Capybara stopped playing completely.

Rebirth of the Fellowship of the Diamond

In March of 2015, Capybara found the jamesrustles 2b2t blog and read about all the things he missed when he was gone. He decided to convince zhode to play again while bringing a new friend to help repair the damaged "8000 base".

Capybara created the tugboat and the stone brick tower, it got griefed, most of the members quit, Capy moved out, inspired the older members to play again, etc.

This was taken from jamesrustles.com and was posted by KillerCapybara

Greetings, KillerCapybara here. I’ve been playing on the server for quite a long time now and have never really made a name for myself. There are some players who everyone knows and loves, others who everyone knows and hates, and players like me who no one cared about but have been playing for just as long. After the Rusher incident, many more people became interested in the history of the server and people like James Rustles, Sato, and Fit wrote and made videos about things that happened on the server years and years before this swarm of newfags had even heard of 2b2t. Seeing some of these posts about or mentioning some of the things that I have participated in on the server made me realize just how much has been lost to time and forgotten. As cool and informative as Sato’s “The Groups of 2b2t” blogpost and Fit’s “2b2t: Tugboat Base” video are, there is some misinformation in there that I feel the need to correct.

The story begins in August 2011. My friends and I had been playing Minecraft together for a while, experimenting with build challenges, adventure maps, and survival maps. While we had been enjoying the game, we were looking for something more to challenge ourselves and play with other people. One of my friends, zhode, had been browsing 4chan when he saw a post about 2b2t.net, a vanilla anarchy Minecraft server with no rules, mods, or admins. It looked perfect; a server that was challenging but still the same vanilla Minecraft experience.

zhode had warned us that the first thing we would see when we logged on would show us exactly what we were getting into. I was the first to log on with him and the first thing I saw was a giant, flaming netherrack swastika above my head and two guys in diamond armor flying above us engaged in PVP combat. That was when we knew we had found our server. Our gang consisted of zhode, serphantking12, _ironeagle_, and myself. Together we sought out to survive and thrive in the most hostile server out there.

The first base we set up was not too impressive and extremely close to spawn. We dubbed it our ‘700 Base’ as it was only 700 blocks away from spawn. This began our very uncreative naming scheme for all of our bases to come. It unsurprisingly did not last very long and we found ourselves moving even further away.

Our next base was one we dubbed our ‘3000 Base.’ It was once again unimpressive but lasted us through September and part of October. Our base was only discovered once another person with the lack of knowledge to move further away from spawn moved in only a couple hundred blocks away. We packed up our limited supplies and decided to move even further away to a place where we felt safe.

In mid-October, we built our biggest base yet. The '8000 Base' was the one we put the most effort into. It wasn't anything amazing and in many ways is extremely confusing and poorly designed. But it was our home so we didn't care. It was an underground base with necessities such as a large central tree farm, animal pens, and chest room along with some goofy stuff like an art gallery, a strip club, and a church dedicated to a sheep that we heard had crashed the server (though I'm not sure if that ever actually happened).

Everything remained underground but eventually we constructed a cobblestone castle outside of our base. This was the only structure that would be above ground at the base for four years.

We based together for a while and eventually a bit of bickering began to bubble up in the group. After an incident involving me killing _ironeagle_ over some diamonds, we came to a consensus that we had to change some things to keep from falling apart. It was at this point we came up with a name for our group, the 'Fellowship of the Diamond.'

After the '8000 Base', a multitude of other bases were created by the 'Fellowship'. A small town called 'Diamond Town' was created in November 2011 with a population of about 8 players. It's notable for being around at the same time as Boatmurdered and we conducted trade with Andrew_Gil at a small trading post in the nether. We created a skybase which we named 'Laputa' after a flying island in Gulliver's Travels. There was the '9x9 Base' which was made with a member of 'Diamond Town' that didn't last too long. All of those bases were griefed shortly after their creation and in January 2012, the '8000 Base' was finally griefed as well. We moved away to our last base, created in September 2012, on a Mushroom Biome. At this point, most of the original members had gotten bored and stopped playing and it was just zhode and I. In October 2012, we left the server and, aside from stopping by to check on some of the older bases in 2013, stopped playing completely.

In March 2015, I discovered James Rustles' 2b2t blog and began reading about all of the things that I had missed out on during my absence. Seeing the server thriving with all of these amazing bases and history inspired me to log in and play again. I managed to convince zhode to play again and brought a new friend, HyraxKing, to help restore the old '8000 Base'. HyaxKing was very productive and created many of the more prominent builds at the base today, such as the pagoda and the stone brick castle. I ended up building the stone brick tower and the tugboat (built in July 2015) that would go on to become synonymous with the base. Eventually, the base got raided and griefed once again and most of the members quit soon after. I moved out and started building a new base in March 2016.

After FitMC made his video about the newly named 'Tugboat Base' in July 2016, I shared it with the older members and it inspired them to play again. We added a new member, KillerCommando29, and they came to the new base and helped to build our largest and most intricate one yet. Most of the members of the revitalized 'Fellowship of the Diamond' have since stopped playing and only occasionally come on to touch up their builds.

The 'Fellowship of the Diamond' has a long history on the server and has been mostly forgotten to time. A lot of the confusion about this group's history came from it's name. At the same time we were playing, another group began playing and called themselves the 'Brotherhood of the Diamond' and made themselves well known for helping people at spawn. Their name got spread around the server while ours didn't since we usually kept to ourselves. Over time, after our group had been long forgotten, people began to associate the two groups together and crediting the 'Brotherhood' with builds that had been built by the 'Fellowship'.

It's an easy to mistake to make and a funny coincidence that two different groups came up with such similar names at the same time. The build shown off in FitMC's second video, "The Mystery of the Brotherhood" was not constructed by us and features signs that seem to give a history of the 'Brotherhood of the Diamond'. We never associated or worked with them while we were playing.

I hope that clears up some misconceptions I've seen about our history. It's been great to see as much interest as there has been about the group and seeing some of our work be talked about to the extent that it has been is very flattering. The 'Fellowship of the Diamond' doesn't look to have much of a future on the server, but it's always possible that one day we shall return full-force to continue making our archaic builds and carrying on our old traditions.

Since the group mainly kept to themselves, it is safe to say that they were relatively neutral with the much larger groups during the time and in the events of the Facepunch/4channer Conflict.

Coincidentally enough, around the same time, another group known as the Brotherhood of Diamonds formed. 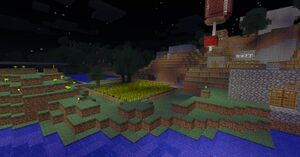 A picture of diamond town's wheat farm before it was griefed, taken some time in 2011. 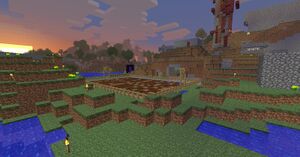 A picture of diamond town's wheat farm after it was griefed. Taken in April 2012.