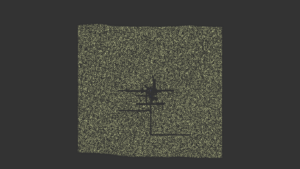 The End is one of the three possible dimensions that a player can travel to in the world of Minecraft. It is a vast void where the infamous ender dragon resides, where islands of end stone are as far as the eye can see, and where end cities are found. It is relevant to 2b2t due to the dimensions long history of backdoors. 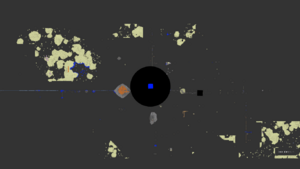 The End is the least populated and explored dimension of 2b2t.

In 2011 popbob and policemike55 had access to a backdoor, they used this to get access to every item in the game, including end portal frames. This resulted in them attempting to make a portal under the NFE. This failed as they didn't arrange the frames correctly, so they abandoned their plans.

The first Ender Dragon was killed by jdw99666, with help from some people from the NFE in early 2012. They got access to the end dimension after xcc2 stumbled upon a stack of end frames, and rebuilt an entire stronghold under the base to get it working. The Dragon Egg was also gathered during this time, and then duped. Hausemaster wasn't that happy about people illegally getting into the end, so he reset the entire thing. Very little is known about this ancient end, but it is known that Jacktherippa made his first end base during these times.

In 2013, xcc2 told Hausemaster about the '/regenerate' command, so he could regenerate chunks on 2b2t to spawn in ender portals. The second (after the end reset) was killed by taylo112 on May 10th, 2013.[1] After the 1.9 update, Ender Dragons could now be spawned in. The third Ender Dragon was probably killed by the Tyranny.

The End has always been a problematic issue on 2b2t, mainly for Hause, because of the rarity of portals. First of all, when the world was updated to 1.0, only three end portals were available in the entire world. Eventually, players found them all, and since during the really old days there were a variety of normal ways to destroy them (such as simply using TNT), they were all griefed. Additionally, portals themselves have been artificially created by players using hacks.

These issues have caused Hause to remove and re-enable the end multiple times, and in later years, to build and maintain end portals near spawn. Hause even destroyed portals himself in several instances, in order to ensure players did not reach the end when it was disabled. Hause's "official" end portals near spawn were removed and/or blocked off regularly, by players who used dragon eggs to delete portal blocks, and bedrock to cover them up. Eventually, he installed a plugin that would automatically replace any end portal blocks that were removed, and installed a plugin to make bedrock unusable by players so they couldn't use it to block off portals.

The End has been mostly barren and largely inaccessible for several years, leading to a relatively small population of players that have ever reached the end and an even smaller population of players that have ever lived in it. For a long time, most people didn't care much about the End, due to the dangers it posed, the lack of portals to reach it, and the general lack of content.

The main area where the ender dragon resides has been lavacasted, withered, and largely destroyed multiple times, with the damage growing constantly over the years and up to the present. However, despite the griefing, the central area of the End has mainly retained its former structure, with the end stone landscape still being largely visible and many of the obsidian pillars still being intact.

With the 1.9 update, the end was largely expanded, and this prompted a rush of exploration into the distant unloaded regions of the end in order to obtain Elytras and Chorus Fruits. Several skybases were abandoned and/or griefed because of this, including Space Valkyria and the DFC. When Shulker Boxes were added in 1.11, another rush of exploration occurred so everyone could get Shulker Shells, which was bigger and more heavily publicized due to the Rusher War happening at the same time.

Retrieved from "https://2b2t.miraheze.org/w/index.php?title=The_End&oldid=62988"
Categories:
Cookies help us deliver our services. By using our services, you agree to our use of cookies.