The Drain was a base constructed by Offtopia and willyroof during the waning days of The Rusher War. Offtopia based with high ranking members of Team Aurora who helped with the construction. The base was toured by FitMC on October 22, 2016, without Offtopia's permission.

Fit was able to find it by using the bedrock exploit of late 2016, which had been used to find the location of his Fitlantis base beforehand. After Fit's video, Offtopia declared that the base was compromised and it was the end. Fit then made a video explaining that he would not reveal the coordinates. However, Offtopia knew Fit had used the bedrock exploit and suspected someone would use Fit's video to locate the base. Eventually, the 4th Reich found the base, due to Fit "accidentally" including the base's region files in his Fitlantis world download, and they griefed it. 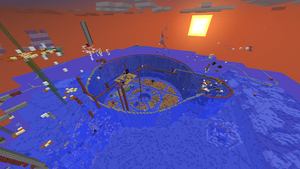 The Drain in September 2019 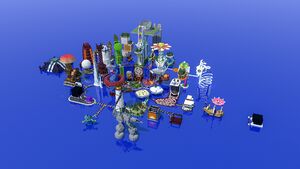 Render of the Autumn Drain in December 2020 by Terbin

On October 22, 2020, a project initiated by a player named nhocangian first aimed to repair the base from its ruins, but eventually the scope was expanded to create an even bigger base than the Drain ever was. Initially, he worked alone, but after some time he invited a few friends over, and after running low on materials, they contacted BachiBachBach, who was surprised with the progress on the base but was too busy to help. DIGMC found the base on November 26 and contacted Terbin, who told Offtopia and Willyroof about the rebuild. The SpawnMasons held a weekly lodge at the base, making some of their own additions while staying. On the 18th of December that year, the base was made public and griefed.

Retrieved from "https://2b2t.miraheze.org/w/index.php?title=The_Drain&oldid=53836"
Categories:
Cookies help us deliver our services. By using our services, you agree to our use of cookies.