"Hause saw the gas chambers and said thats too much" -KamepinUA

The Book Club was founded by 2b2t_Veteran, Gsmack, househousehouse1, Steve3 and HAUSEVULT to record lists of players they had bookbanned. Shortly after its founding, the group went public and turned into a coordinated mass-bookbanning operation. Over the next few days, hundreds of players were banned, many from an automatic bookbanning trap at 0 0 nether known as the "gas chamber". On October 30th, 2019, bookbanning was patched by disabling the "contents" nbt tag of shulker boxes, which also patched .peek and shulker preview mods. The next day, 15 members of the Book Club discord had their priority queue removed and were banned from donate.2b2t.org. Some of the banned players had no involvement in lagging the server or bookbanning players, and some players who were involved in the lagging didn't get banned. This led many to believe admins of 2b2t were inside the Book Club discord, since only those who had their discord name set to their in-game name were banned. A riot started, and information about the true admins of 2b2t was posted to the discord. This gave birth to No Server November, a parody of No Nut November, where Book Club members had to crash the server every day of November. 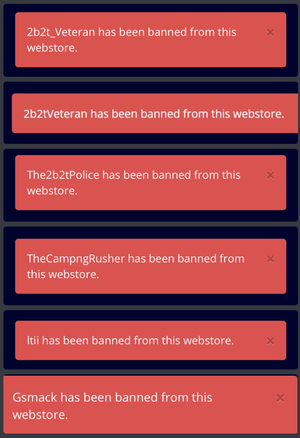 15 players had their priority removed on Halloween. They were also banned from purchasing priority again.

These accounts were banned on October 31st, 2019. Of the 15, 4 were innocent and had no involvement with book-banning or lagging the server. Since the mass-ban incident, other accounts have been banned for lag machines associated with No Server November.

Retrieved from "https://2b2t.miraheze.org/w/index.php?title=The_Book_Club&oldid=49063"
Categories:
Cookies help us deliver our services. By using our services, you agree to our use of cookies.