The Bakery is a meme group operated by the brownmen. It was created by Redstoner___ and Steve3 in response to high queue times.

"Bakery" refers to the use of furnaces in chunk bans used throughout April, the act of banning someone was therefore referred to as "baking"

It was founded in a group chat where members were building ban chunks at the bedrock comet for shits and giggles, Shortly after banning the streamer pewdiepie, Redstoner___ decided to make it into an actual group, however unlike most 'factions', this was a subsidiary of The Brownmen, meaning it was going to be a massive meme but still accomplish more than most larp groups (similar to TheBookClub that was made with the same premise) The goal was not clout but just to send that number (Ban count) higher and higher. There was a leaderboard in the discord server where members would compete for the most amount of bans, therefore becoming the 'CEO'. 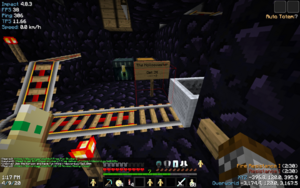 A rather trivial but effective addition was the Holocoaster created by Gsmack and HAUSEVULT. This contraption carted players off from spawn, along the nether highway and automatically trapped them in the portal and banned them. (similar to the gas chambers from The Book Club days)

On Friday, April 17, They started to ban 0 0 overworld with Ender Chests, this was built inside the water cube and was essentially ungriefable. This method was also used to speed up the building process as Hausemaster started removing the bans every 12 hours.

"We estimated an extra 200 bans from join/leave logs, we can't observe 0 0 bans as people get banned the instant they spawn in"

Hausemaster patched Chunkbans on the 20th of April. Little effort was made by the newfag groups to put down the chunkbans, The Bakery's operations had members from the melon knights and Emperium go to the locations of the bakeries to intervene, but they didn't bother to try and destroy because they didn't get any attention for it 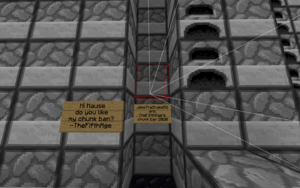 If duplicate entries occur, it means they have been banned on 2 seperate occasions || Bold entries are significant players and/or have associated video footage

Retrieved from "https://2b2t.miraheze.org/w/index.php?title=The_Bakery&oldid=50848"
Categories:
Cookies help us deliver our services. By using our services, you agree to our use of cookies.