test.2b2t.org is an anarchy server under the 2b2t subdomain for testing changes to the main 2b2t server, currently open for the third time, since June 18, 2021, in version 1.16. It had previously been on version 1.12.2 after the server first opened on September 1, 2019, and was populated with people almost immediately when the server operator posted it in chat. It was then posted around in the 2b2t Media Archive, and closed sometime in September. It was re-opened from March 9 to April 12, 2021, to test 1.16, which was found accidentally and populated. It was then reopened for the third time on June 18, 2021, for further 1.16 testing. These events led players to believe 2b2t is preparing to update to 1.16. Such an update would be unheard of in the server, as it has been on the same version, 1.12, since 2017. An official post on the subreddit announcing the server was posted, the first post by the server operators since 2019. 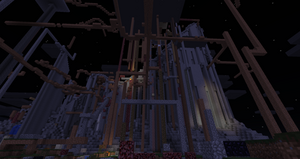 Spawn on September 3, by Koragus

As seen on the serverlist

"further 1.16 testing, switching to original world within a week or two. this time this test server is expected to remain online for a month or up to two months, changing intermittently between the original world and this fresh world."
―Description above playerlist

Retrieved from "https://2b2t.miraheze.org/w/index.php?title=Test.2b2t.org&oldid=57468"
Categories:
Cookies help us deliver our services. By using our services, you agree to our use of cookies.