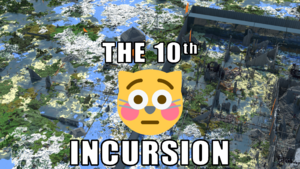 The discord :catflushed: emoji, one of the main symbols of the 10th Incursion

The Creation of the Incursion

On October 12th of 2020, MrBeast, a prolific YouTuber, along with his friend, joined 2b2t. The community began buzzing with activity as this was by far the largest YouTuber to ever join 2b2t, with potential to expose over 50 million people to 2b2t. Immediately, many players began to send negative messages to MrBeast and his staff, denouncing the planned video and the oversight of those that allowed the project to progress even that far.

In response to MrBeast's coming, Joey_Coconut started the 10th Incursion. Initially, there was significant resistance towards the name, owing to the term's rampant defamation and abuse by poorly-planned predecessors as well as a general negative view spawned by Fit. For this reason, the operation was originally called the ":Flushed: Incursion" to ease into usage of the term 'incursion', and to remind players not to take it too seriously.[1] The discord ":catflushed:" emoji became a symbol for the operation, and remained so even after the change of the name to "10th Incursion" later in the operation.

The initial plan followed that of previous incursions, portal trapping all Nether side portals within a 5 thousand block radius of 0,0 destroying infrastructure in the nether to prevent newfags from escaping, dumping lava all over the nether floor, manually destroying farms and other newfag sanctuaries around spawn, and slaughtering newfags.

Cancellation of video and end of phase

Later on the 12th, MrBeast asked Fit to be a part of his video and gave him a rough outline of the video's nature and scope. Fit described to him the many difficulties that such a video would bring, including the rampant toxicity on the server, as well as various issues recording. This, in conjunction with all the negative feedback from the 2b2t community caused MrBeast to cancel his video.

Seeing the :Flushed: Incursion's purpose fulfilled, Joey_Coconut invited the incursioners to build a skybase over the Valley of Wheat, and then called the incursion off. The base was griefed by Team WAO not long after. The decision to suspend incursion operations proved unpopular within the incursion's membership.

After consulting with various members of the incursion, inside and outside the leadership, Joey_Coconut resumed the incursion on the 13th of October, although actual operations would not commence in earnest until the following day. The goal this time was to make crystal pvp impossible on the nether floor. ElGooseMan and Joey_Coconut decided this would be achieved through the use of enchanting tables. As no tables were immediately available, the incursion spammed withers in overworld spawn named 'Shrek', as well as lava on the nether floor. Enchanting tables were not immediately available, so members resorted to mining from the Valley of Enchanting Tables for materials.

On the 15th, BowMasterRobin and hermitiGlock began supplying enchanting tables in bulk, and placing began in earnest. The delay in the start of real operations resulted in a slow start, oftentimes with only Joey_Coconut consistently placing. Meanwhile, the Anti-Incursion materialized, and began consistently camping Nether (0,0). At first, it was almost entirely Stinkykid, although Team WAO, Snake Platoon, and recruits of Emperium would often camp Nether 00.

The table placing sped up considerably, largely as a result of the KOS Assassins, members of Adolf_Hitller's Private Army, and others protecting the table placers. The direct result was an estimated 80,000 tables being placed on the nether floor around (0,0) by the morning of the 17th. The incursioners noticed the server tick-rate drop considerably whenever nether (0,0) was loaded, as well as the frame-rate of individuals within render of the tables. 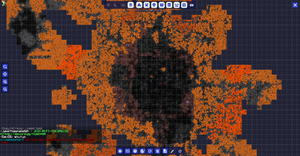 Hausemaster also noticed the lag, and deleted all of the tables early in the morning on the 17th of October. Following the first delete, the strategy shifted somewhat. Up until then, the goal had been to prevent crystal pvp by coating the nether floor in thick layers of enchanting tables. Following the delete, table placement tended towards clustering in towers in order to maximize potential frame-rate lag.[2] A few members also shifted their efforts to the overworld, most notably, ArcInferno with his enchanting table chunk at (2300,0),[3] and rockeZZergon with his powerful lag machine. Placement continued, lag worsened, and even still there was no publicly-released anti-render for the tables. 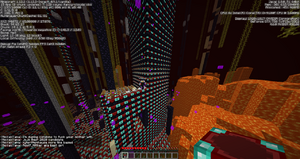 The Enchanting Table cluster at (-100,0) early on in its construction on the 18th of October 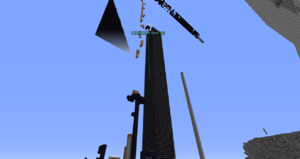 ArcInferno's Enchanting table chunk at (-2300,0) upon its completion on the afternoon of 19 October)

The second enchanting table delete occurred on the morning of the 19th of October. Placement continued, although the incursion slowed down considerably in the wake of the Phobos Incident. The lag machine design created by rockeZZergon was finally completed on the 23rd, and was so powerful that all of his accounts in the area were priobanned. It also brought the server down to 13tps from 20tps almost immediately. Joey_Coconut commissioned a 10th Incursion song by MrBoom420,[4][5] which was released on the 22nd of October, although the popular 'anthem' of the incursion remained Ram Ranch 34 by Grant Macdonald.[6]

The final incursion project was announced to the active contributors of the incursion on the 23rd of October, it was to build a spawnbase. Named The Library (for the many enchanting tables placed in the area), it was griefed and rebuilt several times, as well as opened up to an increasingly large group of people, several times.[7]

The third enchanting table deletion occurred on the afternoon of October 24th.[8] Enchantment table placement in the nether ceased after this, and the incursion began to wind down. On the morning of the 26th of October, the existence of The Library was announced to the entirety of the incursion. Building and griefing there continued on and off until the end of the incursion. 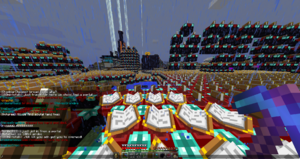 The Incursion Spawnbase, The Library

The End of the Incursion

On the 31st of October, Joey_Coconut proclaimed the incursion a success, and suspended operations for the final time. It had been 20 days since the beginning of the incursion, and 2 years since the end of the Seventh Incursion.

Retrieved from "https://2b2t.miraheze.org/w/index.php?title=Tenth_Incursion&oldid=54234"
Categories:
Cookies help us deliver our services. By using our services, you agree to our use of cookies.