Team Pepsi is a team of players whose goals are to meme and conquer 2b2t. A common tell of their allegiance are the Team Pepsi capes and nametags, visible in Impact client and Team Pepsi's custom fork of the client (Pepsimod). 2pork2bot, Team Pepsi's chat bot, once spammed 2b2t's chat with Team Pepsi slogans but has since gone defunct, presumably shut off by its creator.

The Team Pepsi banner design is a complex one using all six available layers on a blue background. It is obviously meant to represent the Pepsi logo. There are two official variants, one in white, the other in black. 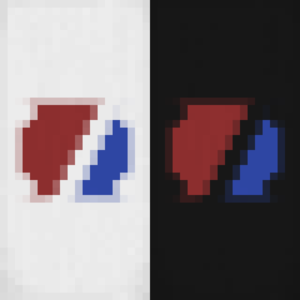 The different designs of the Team Pepsi banner.

Sometime in December 2016, some the founders of Team Pepsi created a Discord under the name #teampepsi, which slowly expanded until it became one of the most active 2b2t discords in 2016. After a lot of turmoil, arguments and several doxxes, the original Discord was deleted on 1/5/17. A number of smaller new Discords have been created since.

Retrieved from "https://2b2t.miraheze.org/w/index.php?title=Team_Pepsi&oldid=50064"
Categories:
Cookies help us deliver our services. By using our services, you agree to our use of cookies.