Swastika Base, also referred to as Vidya Base (alternatively Vidya Town or Vidya City), is the name given to a 4channer base built in the first few months of 2b2t. The base is notable for being the only known semi-large pre-Facepunch base, symbolic of early 2b2t's 4chan-derived culture. It was built by users from the /v/ board of 4chan (hence the name "vidya") and is claimed to have been griefed by April 2011 (unknown if it was griefed by Facepunchers). Its ruins are located at X:7000 Z:-6100. The base was made out of many swastikas and nether portals, with the centerpiece being two pyramids, one inverted, that touched at their tops. Many of the swastikas were made out of unusual materials, such as diamond blocks, and lava encased in glass. There was also wool pixel art at the base. 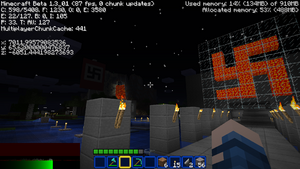 Rare pre-grief screenshot from March 24, 2011, taken by BennyGun. A second swastika can be seen in the background, although it is extremely faint. See an uncompressed version here.

The base was originally founded by 4channers from the /v/ board, the earliest date the base existed that can be proven being March 12, 2011. Very little is known about the base. u/CatWhisperer420 and BennyGun have visited (or lived at) the base, due to evidence from u/CatWhisperer420's Reddit account and screenshots from BennyGun at the base. Other players such as Offtopia and willyroof have also visited the base, though it is unknown the usernames of the original builders. The inverted cobblestone pyramids were added onto the base later on, as early screenshots excluded the pyramids. u/cenotaph69 claimed to have built them, though without proof.[1]

The base is known to have been griefed during or before April 2011, according to Offtopia.[1] It is unknown if this was a result of the Facepunchers.

After it was griefed, assassin_raptor built a temporary base over it, which was in turn griefed.

In August 2017, the base was repaired by a player named Diagoporotin, and was in turn griefed by Armorsmith.[2]

"Its was my pleasure to fix this base. After looking at your post about this base, I went to visit the base for the 5th time since 2016. I used old screenshots from CatWhisperer420 and other screenshots of the base in order to get a general idea of how to repair it."
―Diagoporotin, 8/21/17[2]

Some of the following screenshots use versions to approximate their date:

Retrieved from "https://2b2t.miraheze.org/w/index.php?title=Swastika_Base&oldid=60066"
Categories:
Cookies help us deliver our services. By using our services, you agree to our use of cookies.