Space 2k2k was an End base built by Armorsmith's Followers. The base was built at the coordinates X: -2,000 Z: -2,000, the same coordinates as the famous Facepunch base 2k2k, but in the End.

Before the base was constructed, the coordinates of 2k2k at the End had nothing built there, despite its attractive location.

The player Turbxy was put in charge of the base, and he recruited several other players to construct it. RusherFag was a significant builder. Construction begun on June 1st, 2018.

Lambo_Veneno, who was loyal to Armorsmith's Followers in the past, leaked its coordinates and caused its destruction.

The base included several unique features that were not often seen at other 2b2t bases. It had a lot of mini-games a visitor could interact with, including parkour courses and a maze, as well as several houses of worship, and even a lag machine. These were built in addition to the more usual things that are more common in End bases, such as an Enderpearl farm and direct access to 2 End cities. The entire base was covered with trees.

Inspired by the Kaaba in Mecca, the Armorsmith Log Out Kaaba served as the log out spot of the account Armorsmith. It was considered the holiest site in the base. 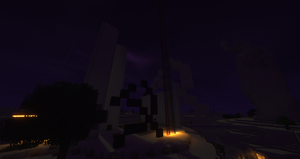 The Armorsmith Parkour Pyramid was inspired by a similar structure which was found at Swastika Base, but unlike the building from the 2011 base, this one contained an extremely difficult full size parkour course inside. It is unknown if this course was the first ever built at a significant base on 2b2t, but it's almost certainly the most difficult one, as all jumps were taken directly from the Minecraft server "Jumpcraft", and only a skilled player could complete it without cheating.

The parkour course had a lot of hard jumps, such as head hitter double neos, triple neos with trapdoors and ladders, etc.

Armorsmith's maze was another fun minigame added to the base, near the enchanting area and the Slime trampoline. It can still be seen in renders of the End's Spawn, as all Endstone blocks were dug by hand while constructing the maze. It was considered medium difficulty.

The unfinished cathedral contained a small church and all the farming area of the base. The island in which it was built on was completely covered with grass and had a small church made of gem blocks.

The Statue of Liberty was constructed by RusherFag and was built to represent an alliance the group previously had with Caviyaz and Omega City. This alliance was represented in the base with an embassy at one of the End Cities dedicated to the "OG Names of 2b2t" division which was partly owned by Caviyaz at the time. The island also had an unfinished "Overworld Tunnle" below the statue.

The farm used by members of Space 2k2k was constructed by adding water to all surrounding islands. The entrance to the Enderpearl farm and the End City nearby was marked by a huge 20x20x20 Hammer And Sickle which was designed by RusherFag.

The base had small lag machine that would drop TPS to less than 10. It was griefed by one of its members.

The base is located in a high traffic area but despite this, some structures are still recognizable and some visitors left vines and a few lava casts in the area.

Video of the ruins of Space 2k2k by Armorsmith's Followers

Retrieved from "https://2b2t.miraheze.org/w/index.php?title=Space_2k2k&oldid=56872"
Categories:
Cookies help us deliver our services. By using our services, you agree to our use of cookies.