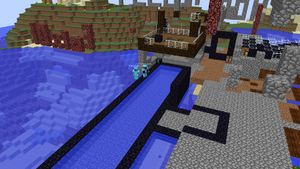 A screenshot from when the canal ended at 100k

A bridge, a common sight along the canal

The Southern Canal is a public canal that runs along the +Z axis and colludes with the Overworld +Z Axis Highway. As of July 2020, the canal stretches for over 300,000 blocks.[1] It has been expanded and maintained by many players throughout its history, with dedicated repairers being part of the South Canal Corp. The canal carves through hills, mountains, and all other natural terrain down to the water surface at y:64.

The canal was founded by ThebesAndSound in December 2014. It began at around 0,26.5k, with the original intention to build northwards (towards spawn), and finish at spawn. Over the span of four months, Thebes finished the original section between 0,21.5k and 0,26.5k, which is 5,000 blocks long.

In March 2015, Thebes contacted ChadDX, who was known at the time for building at spawn. Thebes gave Chad full ownership of how the spawn end of the canal should look and where it should be. Chad decided it should start at 0,1200, on the outermost ring of the three spawn ring roads he had built (400, 800, and 1200). Work was done by ChadDX, joshYarnspinner, Dic and rainyafternoon to complete the 1200 terminal. A short section of the canal was made from stone brick leading south away from the terminal. Upon hearing news of the work happening at the spawn end, Thebes traveled to 1200 to meet who was there. This culminated in Thebes's abandonment of the original section to work with the group at spawn and build the canal southwards from there. This group of players eventually became known as the South Canal Corp.

The canal saw big changes due to the 1.9 Minecraft update. During the update, boats received optimizations that made traveling by boat much easier and smoother and so allowed players to travel at speed on the canal. Also along with 1.9, the enchantment Frost Walker became a problem as players would walk over the water and freeze large sections. Frost Walker damage is no longer an issue however, as Hausemaster re-enabled frosted ice melting during The Rusher War, in which the Southern Canal saw significant damage.

During the Rusher War, the Southern Canal was a large hub for Rushers as they would use it to escape Spawn, as the use of boats reduced hunger less than sprinting. Rushers, along with griefers, caused damage to several buildings along the canal. The two terminals at the start and end of the canals were both griefed during the war.

The top block of the canal walls were fully replaced by obsidian in July 2017.

On August 9, 2017, the Southern Canal reached the 100k milestone. This milestone being announced resulted in the vast majority of the canal to be drained of water using slimestone machines and withered by griefers. A group of volunteers came to the canal and helped South Canal Corp to repair and upgrade the canal, making most of its walls and floor out of obsidian, and adding barriers to counter the use of slimestone machinery. There were numerous PvP encounters in the first days of the repair, including an ambush by jared2013 and other SpawnMasons on August 19, 2017. Later on, the griefers lost interest in destroying the canal and the repair team continued to fully repair and upgrade the canal back to 100k. 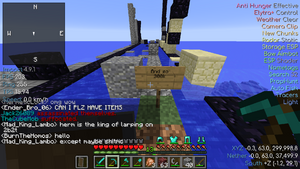 300k on the Southern Canal, screenshot by Scxlly

On January 17, 2020, a rare server crash corrupted, cloned, and reset some of the chunks at the Southern Canal. Somewhere in 2020 griefers like 0Neb and MadKingLambo started drying parts of the Southern Canal. The majority of the canal is still filled with water.

Retrieved from "https://2b2t.miraheze.org/w/index.php?title=Southern_Canal&oldid=62682"
Categories:
Cookies help us deliver our services. By using our services, you agree to our use of cookies.