SnackyNorph, commonly referred to as Snacky, was an oldfag who joined 2b2t in 2011. He created Snacky's Library and was later an active member of The Lands, as well as several other bases. He was later the main suspect in the leaking of Aureus City's coordinates due to his relationship with CancerChan, whom he met after the Rusher Invasion. He later became isolated and quit 2b2t due to this incident.

SnackyNorph joined 2b2t in 2011 and was a part of the Facepunch Republic. He settled with AWarGuy, another Facepuncher.[1] He was an active player and was present at the 2012 April Fools' temp map.[2] He was known for almost always using chat in green text.

A screenshot from mid to late 2012 alludes that SnackyNorph was still basing with AWarGuy. 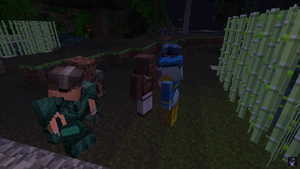 SnackyNorph on a 2013 temp map 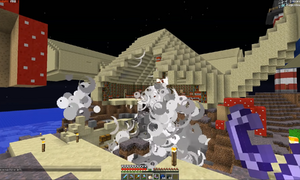 Sometime during 2012, he built his library, Snacky's Library. He lived there with several others including Zach3397 and xarviar. Zach managed to burn the Library in December 2012 and it was rebuilt. During a temp map on April 27, 2013, he based with members of the Black Flag Group and Hitlerwood, who he based with afterwards, on the main map, at Valkyria. Snacky's Library was destroyed by OreMonger in May 2014.[3] He found Zach's dupe stash, and, according to hear-say, found Javazon already raiding the base. OreMonger managed to kill Javazon and loot the majority of the dupe stash before Javazon got back (Javazon had a bed set within a 40-minute travel).

After the grief of his library, Snacky asked Jacktherippa if he could join The Lands, and he was invited. Snacky brought ExaltedSpartan, xarviar, stupidwalrus, and AWarGuy with him, as well as two others who weren't allowed (JtylerBlue and a mysterious unknown player[4]). There, he would coin the name of the base as "The Lands of Norphs and Niggers" which was shortened to its more-well known name.

"He joined me cause he wanted to. We knew each other cause he shitposted a lot and I was traveling on the Nether roof... and I was bored and I liked his stories. He would do stuff like uh – that was what was interesting about Snacky – he would spam Edgar Allen Poe's The Raven, and like My Immortal, and really stupid shit, and then really cool shit. And he had a sense of humor about it."
―Jacktherippa, May 2, 2021[5]

He built his Tower of Autism there on February 2, 2013, constructed mostly of snow and housing multiple farms and a storage area. A year later, xarviar built a plane crashing into the tower, symbolizing 9/11. Eventually, Snacky got bored used /kill to get back to Spawn, as did many of the base's residents. He later based at Fenrir and Aureus City.

During the Rusher Invasion's influx of new players, a new player known as CancerChan formed a close relationship with SnackyNorph by pretending to be a girl. Taking advantage of SnackyNorph's desperate need for female attention and intimacy, CancerChan catfished SnackyNorph into basing with him and forming a seemingly romantic relationship, involving exchanges of nude photographs of each other (CancerChan used nude photos of his ex-girlfriend). The two would form a couple of bases together, with at least one or two of them being dupe bases from the 11/11 Dupe.

SnackyNorph planned on taking his newfound "female" companion on a tour of the places he bases or notable locations and had planned on taking CancerChan to see Spartan512's pony map (whose destruction solidified Spartan's permanent retirement from 2b2t). SnackyNorph, set on a course to another base he shared with DemonElite119, pointed CancerChan in the general direction of where to go, without revealing exact coordinates to the map or Aureus City.

This, however, did not stop CancerChan from finding Aureus City. CancerChan, fueled by a hatred for Fit and his shenanigans with Team Veteran which he viewed as further fueling the roleplay war TheCampingRusher and Fit were carrying out for YouTube attention, he would go on to bait and social engineer his way to Aureus City via means of poking at CainesLaw, a notable oldfag and founder of the base. CainesLaw inadvertently confirmed a general location for the base and its coordinates. CancerChan then leaked them to CorruptedUnicorn and Benito_Tortelini, who made them public. This put CainesLaw, as well as Fit, whose museum was located at Aureus City, into panic.

Due to SnackyNorph's general association with CancerChan and their constant portrayal as an e-couple, he became the recipient of much of the blame for the incident. This notion was further fueled by Fit when he put a video out about the destruction of the base, laying full blame for it at SnackyNorph's feet. This led to the loss of most of SnackyNorph's 2b2t companions, and he would exile himself from other bases he was occupying.

This all culminated with Snacky having no friends left on the server, save for a few, although he would later turn on at least one of them for dubious reasons. CancerChan has since leaked an entire Skype conversation with SnackyNorph, as well as two photographs of him, one of them revealing his penis.

"Don't let whatever you've heard from videos in the past influence how you think about Snacky. He was a cool guy. He was accident-prone as all hell. And that's predominantly why people have the opinion of him that they do. They think he leaked stuff on purpose, but again he was accident-prone. Snacky did stuff that he regrets because he was accident-prone. But it wasn't like the end of the world. he's doing well as far as I know. So yeah, I wish he'd come back, but like, I understand why."
―Jacktherippa, May 2, 2021[5]

Retrieved from "https://2b2t.miraheze.org/w/index.php?title=SnackyNorph&oldid=61637"
Categories:
Cookies help us deliver our services. By using our services, you agree to our use of cookies.