The Sixth Incursion was started[1] by Sato86 on April 3, 2018. It was confirmed that AntVenom would be releasing a video about 2b2t that day, set to be accessible at 16:00 EST. AntVenom, who at the time had over 2 million subscribers, made a video called "The Face of Minecraft Anarchy" in which he explained the synopsis of what 2b2t is. In his video, he explores the multiple sides of 2b2t and its community. A warning about the community's toxicity was placed at the start of the video. The Incursion members called themselves "rats", opposing the incoming wave of "ants".

The 6th incursion began later that day on a temp map, which was created because Hausemaster wanted to port the map to new hardware yet again over performance concerns. A small End base was built by members of Spawn Masons, Emperium, Asylum, DonFuer, VoCo, NJHI, Fursecutioners, Team Veteran, and The Soviets on the temp map. A wave of "Ants" or "Antfags" joined the temp map following the video's release and server player counts were seen as high as 350+. The leaders of the 8 groups mentioned earlier began to plan their operations for the main map.

Back on the main map, the incursion fighting kicked into full gear. A few other groups decided to join in on the Incursion, such as the Imperialists. Members of the incursion decided to build an obsidian wall around 1k of spawn. The obsidian used to make the wall was obtained through slave labor camps at both nether and overworld (0,0) built by incursion members. New players would be captured and forced to mine obsidian, if they didn't comply they were killed. This was the first known time in server history where slave labor was used in a near-industrial scale. The Great Obsidian Wall was named the largest community project ever completed in server history at that point. 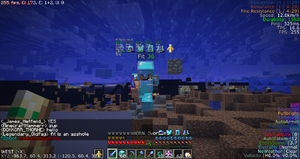 Fit defending the western wall from Armorsmith, the damage to the wall by the Anti-Incursion is visible.

During the construction of the wall, an organized Anti-Incursion movement was formed, led by Armorsmith's Followers. The Anti-Incursion started to attack the wall and significantly slow down its progress. They attacked all sides of the wall and prevented the Incursion from building the wall up to y256. They began to grief it with thousands of withers in all sections of the wall. IHackedWalmart spent much of his free time killing incursion members and gearing new players. These moves by the Anti-Incursion led to battles between them and the Incursion, including the infamous Battle of the Northen Wall[2], which caused the complete destruction of that section of the wall. Later, Armorsmith attacked the western wall, withered it, and ambushed Fit, starting a fight that would later become a meme, in which FitMC lost (resulting in the infamous "I GOTTA LOG GUYS" video)[3]. After the fight, the rest of the wall was destroyed by withers, with attacks in the southern and eastern sides, making it like "swiss cheese" with many holes that allow new players to avoid the wall easily and escape spawn. The wall was practically useless in preventing the AntVenom invasion, as it was proven to be too difficult to fix and repair.

Despite this, the wall was marked as a sucess by the Incursion, due to its symbolic achievement of uniting the community on a single project, and they declared it completed on April 24th, 2018. The incursion continued to repair and defend the wall, and to fight the Anti-Incursion, up until it's official end on May 3rd, 2018, one month after it started. Players counts were going back to normal by the incursion's end. The Incursion was considered a success by most of the community, even though the obsidian wall has not proven effective due to being rather easy to get through, the many griefings during the incursion, and the fact it turned out to be shorter in height in some places than in the original designs.

The 'Slave Labor' meme came out of the 6th Incursion. The incursion decided that they would get the obsidian for building the obsidian spawn wall by forcing the Ants to mine ender chests, as 1 shulker of ender chests would yield 8 shulkers of obsidian once mined. Thus, the incursion members would have to dupe less for the same amount of materials, and the extra labor to mine the chests would be supplied by the Ants. To provide the "slaves" incentive to not /kill their way out of work, they would be paid for their efforts with gear, with many being accepted into the incursion, so the term "slave labor" isn't exactly accurate.

Before the "Slave Labor" plan became official policy of the Sixth Incursion, Ants were usually killed on sight. But after the introduction of the new plan, Ants and other new players were captured at spawn, and put to work in the Gulag Spawn Camps . These camps were set up both in the Overworld and the Nether, with the most notable gulag camp being the so-called "Sky Gulag" near 0,0 overworld. The wall was partially completed in 2 weeks, largely do the the efforts of the camps.

The Great Spawn Wall would not last long because of the efforts by the Anti-Incursion, but it was a great achievement in community effort. Hundreds of players had forcibly been mining obsidian for it, and dozens of people helped build and maintain it.

Retrieved from "https://2b2t.miraheze.org/w/index.php?title=Sixth_Incursion&oldid=61999"
Categories:
Cookies help us deliver our services. By using our services, you agree to our use of cookies.