From 2b2t Wiki
Jump to navigation Jump to search
The Shortbus Caliphate (SBC) also known as "FunGroup" of 2b2t is the self-declared "most irrelevant faction on 2b2t" who's goal is to meme. The group attempted to transform into the Jewish Internet Defense Force (JIDF) after the fall of Block Game Mecca, but it never fully succeeded as the shift from Muslim to Jewish was never fully committed to. 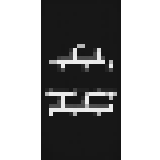 The Shortbus Caliphate was founded on 6 November 2017 by AutismBot, Joey_Coconut, and _m_o_t_h_r_a_ following months of Islamic religious instruction in the Block Game Mecca discord server by Joey_Coconut. Its ostensible purposes - to be the "most irrelevant faction on 2b2t", and to 'spread the glories of Block Game Islam'. Its actual purpose, however was to serve as a smokescreen for Block Game Mecca, so that projects could be built and posted about, crediting the members of the base, but protecting the secret identity of Block Game Mecca.

Immediately following its foundation, the Shortbus Caliphate as an organization itself was not very active, as the vast majority of its members were residents of Block Game Mecca. Most activities of the Shortbus Caliphate were also activities of Block Game Mecca. While originally following this routine in the case of the Shortbus Caliphate Mapart[1] (designed by _m_o_t_h_r_a_, actualized by Joey_Coconut, and built by the Meccaites at large), attitudes gradually shifted. During this period there was a large influx of members. As a a Hitler statue had been built and the schematica already existed (special thanks to Nations), it was decided to build a replica in spawn. The result was the Hitler Beach Party Scavenger Hunt[2] in April of 2018. This was during the Sixth Incursion, where most members of the Caliphate were participants, although not under its banner.

The construction of Hitler II was a landmark event in the History of the Shortbus Caliphate as it was its first major activity that did not just include members of Block Game Mecca. About 1/3 of the participants were not Meccaites. Many members of the Shortbus Caliphate joined jared2013 and the revived 4th Reich for its 31bases31griefs challenge. This ended on 31 May, 2018. Soon after this, Block Game Mecca was leaked and griefed by Beardler. Information regarding the coordinates of Beardler's base, Purgatory II (of the Builder's Haven group) became known. Xdolf and AlphaComputer joined the Shortbus Caliphate and they, _m_o_t_h_r_a_, and AutismBot destroyed the base.[3][4] Beardler was subsequently kicked out of his own group and his involvement in the server fell drastically afterward. Upon the fall of Block Game Mecca on 1 June, 2018, the members decided to shift to a Jewish theme, though that theme was never fully committed to. 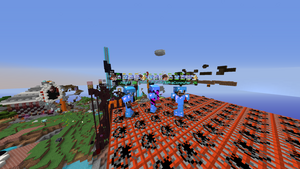 Purgatory II being griefed by members of the Shortbus Caliphate.

Even though the group was renamed and re-themed, all the members continued to call it the Shortbus Caliphate. On September 11 2018, AutismBot resigned from his position at the head of the Caliphate (since he quit the server), and handed leadership over to Joey_Coconut. It was subsequently reorganized on the 20th of that month to fit its original Caliphatic theme. The group became inactive, only reactivating again in late July of 2020, after Joey_Coconut merged the JIDF back into the Shortbus Caliphate.

The Calculator I was a base founded by Joey_Coconut on November 27th, 2020 and was Intended to be used as a Spawnmasons lodge on December 12th, 2020. However The short lived Calculator I was greifed on November 30th 2020[5]. After the destruction of Calculator I, Calculator II was founded on December 3rd , 2020, and it was planned to just be used for the lodge, but it slowly began to develop into and actual base. At the beginning there were only around 10 members that were building the lodge, however by the end of the base, over 30 people had visited the base, and many of them were members. The Calculator 2 was greifed on December 26th, 2020[6] by Armorsmith's Followers. 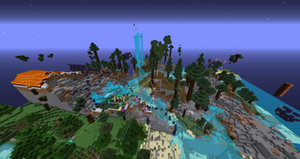 Retrieved from "https://2b2t.miraheze.org/w/index.php?title=Shortbus_Caliphate&oldid=59828"
Categories:
Cookies help us deliver our services. By using our services, you agree to our use of cookies.