Sato's Timeline was a series of 2b2t timelines created by Sato86, which is generally accepted by the 2b2t community. It was updated every year or so until 2020 before being discontinued following Sato quitting the server. It includes an "Age" followed by a shorter "Period." The following was the last timeline in written form:

The Age of Unrest represented on the timeline. Behind it is Camp Facepunch. The notable banners include the 4channers and Facepunchers.

The Age of Unrest was a period of time between Beta 1.2 and Beta 1.8 where 2b2t had between 50-80 rising players. The main sources of players were ads run on 4chan which sparked the 4channers or the collected Facepunchers.

The Great Decay Period represented on the timeline. Behind it is Imperator's Base.

The Great Server Decay, or simply Great Decay, was a time in 2b2t's history where the player-base stagnated in numbers. It lasted from 2012 to 2013, and during it the average amount of players online was about 40. The period was mostly fueled by 2b2t's domain change from 2b2t.net to 2b2t.org, coupled along with 3 months of down time during the change. This made many players believe that 2b2t was gone for good. This period is also considered one of the most widely-agreed periods on the 2b2t timeline, as many iterations of 2b2t timelines use it and due to its objectiveness. It is often represented with a skull and was thought to have no major active groups during its inception.

During the decay, overall activity was low and not as many bases where being built and griefed as in the 2011 days. Hausemaster did a lot to try to save the server, such as hiring helpers for the server and setting up temp maps to experiment with plugins on.

Before the Great Decay, the server was experiencing a busy time in its history with lots of new bases being created and griefed, and many players joining and having conflicts with each other. This period is called the "Age of Unrest" in Sato86's timeline. All of this activity strained the server, and 2b2t had to get better hardware to run. That coupled with player disinterest and some unknown factors, made Hausemaster and Georgebush420 shut down the server for 3 months.

The end of the Great Decay is not fully agreed upon. Sato86 himself has put the end at April 29th, 2013, the founding date of Valkyria. However, this could be a biased view of it, as Sato86 is one of Valkyria's founders. If Valkyria is not counted, its end could be put around mid-2013. Many new players began joining and stayed active, many of them from a Reddit post.

2012 marked the beginning of the Great Server Decay period. It was a period of time where the general player base fell due to lag spikes, Facepunchers/4channers leaving, and the IP change from .net to .org.

The Age of Resurgence represented on the timeline. Behind it is Wrath Outpost. The notable banners include Valkyria, Vortex Coalition, and Legion of Shenandoah.

The Age of Resurgence was a rebound in the 2b2t Playerbase and activity in general. It is commonly, but not always, associated with the founding of Valkyria due to its importance and prominence in this time period.

The Pre-Hype Period represented on the timeline. Behind it is Space Valkyria. The TNT symbolizes the many bases griefed in this time period.

This period marked the beginning of Project Vault and saw a mass decay in the player base towards the end due to the 3rd Backdoor crisis.

The Age of Hype represented on the timeline. Behind it is the Valley of Wheat. Many notable groups sprung up in response to Rusher's fanbase.

The Age of Hype marked the period where the 2b2t player base saw never before seen attention after Rusher started his series on it. 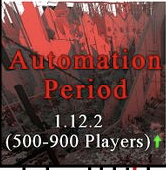 The Automation Period represented on the timeline. Behind it is a great number of lavacasts.

This period is controversial in the 2b2t community and has a monotone version of 1.12.2 throughout, It is usually defined by the introduction of Baritone that has allowed large structures to be built around the server

Sato86's latest iteration of the 2b2t timeline.
Retrieved from "https://2b2t.miraheze.org/w/index.php?title=Sato%27s_Timeline&oldid=60301"
Category:
Cookies help us deliver our services. By using our services, you agree to our use of cookies.