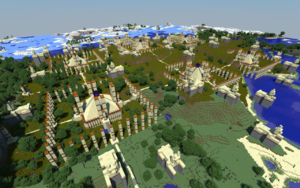 The Valley of Wheat. 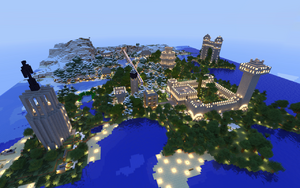 Sanctuaries are (very usually) crop farms that reside within the area of spawn, or farther out along the nether highways. The term was dubbed by 2b2t players due to TheCampingRusher using it to describe these farms. Many people have made sanctuaries, from oldfags to newfags, either for the consideration of newfags at spawn to gain food on their ventures, or to make an attempt to save themselves from hunger.

The most notable sanctuary was the Valley of Wheat, which was the longest-lasting and largest sanctuary on 2b2t. Now it is instead the 2nd most griefed place on 2b2t, the 1st being spawn. It is located 13,000 blocks away from the overworld +X Axis Highway. Another notable sanctuary, NFE, lasted a similarly long amount of time even closer to spawn and was destroyed and rebuilt multiple times over the years. NFE was given its name from its coordinates: Negative Fourhundred Eighthundred, at -400 800.

Some of the most common ruins around spawn are the remains of ruined sanctuaries, ruined from people either deliberately griefing them or just never replanting. If players are lucky, they may find a sanctuary that has not been touched by griefers.

A large number of sanctuaries were built during the course of the Rusher War as many newfags attempted to survive the harsh conditions of the server at the time. Many of these were destroyed, as were many of the sanctuaries that existed previously, and now most of the existing sanctuaries are fairly new. An increase in sanctuaries now usually follows incursions or other floods of players, as they establish temporary sources of shelter and food.

Example of a Spawn Sanctuary built by a group for recruitment purposes.

One common recruitment tactic is to make sanctuaries around spawn with signs instructing the player on how to join a certain group and to litter the sanctuary with propaganda for said group. This method was popularized by HolyBruhBrine in the Vortex Coalition. Other times it can be from directly speaking to players or waiting for them to show up at the base.

Retrieved from "https://2b2t.miraheze.org/w/index.php?title=Sanctuaries&oldid=49622"
Category:
Hidden category:
Cookies help us deliver our services. By using our services, you agree to our use of cookies.