An older isometric render of Spawn

Spawn (short for Spawn point) is centered at X:0, Z:0 in the Overworld (commonly called 0,0) and refers to the area around it for several thousand blocks. From a technical standpoint, the server spawn point goes out for around 2,000 blocks, as this is where players spawn when joining the server. In the context of 2b2t and many anarchy servers, however, Spawn is defined as the destroyed area around 0,0 rather than the spawn point of players. Due to this definition, few people agree on how far out Spawn is, and it generally has a very flexible definition. The word "Spawn" alone usually refers to Spawn in the Overworld, but it may also refer to the Nether Spawn depending on the context. The 0,0 area is also unofficially nicknamed the "Crossroads of 2b2t", due to its central location on the server and the place where all Axis (and Diagonal) Highways meet.

pYr01v1aniac stated that players spawned in a radius of 50 or 100 blocks from 0,0, making 0,0 "very busy", with players chasing and punching each other.[3] Hausemaster eventually made a 16x16 obsidian platform at 0,0 to avoid creepers exploding large holes killing new players.[4]

Several walls have been made around Spawn, the most significant being the Great Obsidian Wall built during the Sixth Incursion in April and May 2018, and the Linked Horizon Wall which was built in 2021. 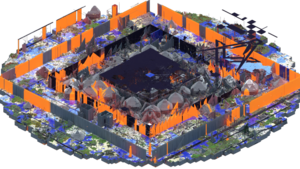 Render of the Spawn region during June of 2019.

Spawn in the present is very, very chaotic. 0,0 has been covered in a water cube and an obsidian ceiling. In 2019, attempts by the Eighth incursion to expand the water cube to a 500 block radius of spawn failed, which left behind a level of water just above the bedrock level. There are huge obsidian symbols in the sky, including The Masonic Eclipse and the symbols of many groups, including Armorsmith's Followers (a hammer and sickle), Emperium (four large omega symbols), and the Infinity Incursion, some of which have been made hard to recognize. Many groups and players have also placed their banners around spawn, with the most common being PRThomas' banner. Many places, such as the Valley of Furnaces and 2k2k, have been lavacasted, or in some cases, ripped off the map entirely, leaving only floating cobblestone behind. A lava wall surrounding spawn 2000 blocks out that was built by the Purge (and repaired by the Infinity Incursion) makes it more difficult for new players to escape spawn.

In the past, FPS Lag Machines were a common threat to newer players, in addition to other chunkban exploits in which player(s) are kicked consistently from the server due to an error involving glitched chunks. These exploits became less common as time went on, although they still occur occasionally.

Most major changes to the spawn region in 2020 were done by the Infinity Incursion, with the group completing a 2050 x 2050 obsidian roof over the spawn region, building a 2k x 2k lava wall around spawn and a 1k x 1k watercube with the goals of making it harder for new players to escape the spawn region. All of Spawn's lavacasts in a 500 block radius were destroyed to make way for the water cube, resulting in the discovery of two illegally-placed bedrock blocks. Despite the purpose of the water cube, it made escaping spawn easier, as players spawned on top of or away from it. There have also always been various groups such as TeamNoTrees that have been at work destroying all dirt at spawn with all dirt in a 2000 block radius being bombed by the group. 2020 has had the most change to the spawn region compared to any other year.

Spawn was first generated in the early Beta versions of Minecraft as a forest and a desert with a couple of small lakes, a far cry from what is now. Spawn is usually described as a wasteland, or "cobblestone hell", because of its lavacasts resembling mountains of cobblestone. Spawn also has many abandoned houses littering the area, along with bridges, swastikas, ruined farms, and ruins. 0,0 tends to be the hardest part to traverse due to it having no continuous ground other than the obsidian roof, instead of being made up of patches of blocks, requiring players to jump or build across them to travel. The water cube makes it harder for newer players to travel, because of the risk of drowning.

The composition of spawn is constantly fluctuating due to the massive amounts of player activity there. However, there are several notable areas within the 2000×2000 area at spawn that either remain relatively consistent or were significant to the server's history. These include but are not limited to: However, escaping spawn becomes somewhat easy if a newfag can make use of hacks to get far enough to find food and is cautious on the highways without losing too much hunger.

There have been several attempts at "water cubing" spawn to a certain degree with three overworld spawn cubes being mostly completed throughout 2b's history. The first notable water cube was 1000×1000 blocks started by flip35, sheergenius, Stlavs, StrongForce, and later aided by Negative_Entropy. The water cube also went up to the build limit (actually making it a cuboid). In April 2017, a movement started to destroy the first water cube known as "Make Spawn Dry Again", started by Joeilk, ImmortalYogurt, 1_7, and jared2013. After the first had been drained by the movement, a second 100×100 water cube was started by SkullerG, Gsmack, 4Pilot, MadKingLambo, jakeness56, zZT and later aided by Mc_ren, 0ffsets, Killinqq, and LordPopcwrn in July of 2018.[8] In July 2019, the Eighth Incursion started the construction of a new 1000×1000 block water cube made of source blocks at spawn, which was never finished and turned into the "water floor", a layer of water source blocks just above the bedrock level that prevented Crystal PvP. In September of 2020, the Infinity Incursion constructed a 1000×1000 block water cube which was supposedly made much more efficient and resistant to griefers and extends from bedrock to build limit.

The Linked Horizon project was started by OMEGAO000 to build a circular wall with a radius of 2048 blocks around spawn. The wall was completed in 125 days, with over 100 players placing 8.26 million blocks of obsidian.

This project was dedicated to destroying bedrock at 0,0 in the overworld. The first players who made a hole in it were rockeZZergon and cattyyyn, but after the Battle of Ziggy Town, Hausemaster patched headless pistons, making unable to break bedrock anymore, so project was discontinued. After Breakery leaked a new bedrock-breaking exploit using nether portals, some players (including rockeZZergon) continued the project. On August 9th, 2021, the project was finished, resulting in a 32x32 void chunk at 0,0.

The first known instance of a major group taking initiative to "fix" spawn was Team Uberslugcake. Team Uberslugcake began when UberSlugCake hand-picked newfags like him to form a group to fix spawn. The operation officially began on January 5th, 2014. Soon, the group unexpectedly expanded, and UberSlugCake dispatched members from their hub to create "UBER BASES TM" around spawn. Their efforts lasted for months, creating farms and destroying lavacasts. This lasted until April of 2016 when the 4th backdoor climaxed, and all of Team Uberslugcake's UBER BASES TM were compromised and the project was destroyed.

Project Bricked was started by FuzzyRussian. The project was dedicated to filling Nether Spawn with obsidian and ender chests, trapping players, and causing FPS lag to those without the correct NoRender settings. It was conducted from January to March 2022 in response to Fortnite Ninja and then TommyInit joining 2b2t.

Spawn Incursions, or Spawn Occupations, are invasions of spawn, initially begun in 2013 by the group Valkyria. They involve a large concentration of players coming together for a purpose, usually for mass genocide to an influx of newer players and to create massive public works projects. Previously, Incursions were due to small player influxes, boredom, or to avenge fallen bases. Currently, they're due to the YouTubers' influxes, as when they make videos on 2b2t, they bring their fans with them. More recently, the Infinity Incursion initiative begun with the goal to stop all newfags, with players standing watch at spawn indefinitely.

Many individuals stay stationed at spawn to massacre incoming new players. These are known as spawnfags. They usually stay around public highways and around spawn in the Overworld and Nether to add more challenges to newfags attempting to escape. They are also typically PvPers, and in addition to making it harder for new players to escape, they kill other spawnfags.

The future of spawn is unknown. Spawn's future is dependent on the population of the server and the heat around it. Currently, spawn is facing huge amounts of destruction daily. Those who seldom visit spawn regularly, and return after a period of time absent, may find themselves looking at a nearly different area. It's expected that the x,0 z,0 coordinates and the area surrounding it will be a complete bedrock crater, and the area surrounding it will turn into this too. It's also likely that eventually the increasing prevalence of lava casts and blocking walls will stop newfags from leaving spawn, making Hausemaster possibly have to remove said structures for the health of the server. It may also be possible that the spawn radius is increased, leading to an increase in the region where spawn lies, causing destruction in border forests and relatively quiet places. Due to the new water mechanics in the 1.13 update, there have been plans to flood spawn using flying machines and turn it into a gigantic ocean. This would cause many new players to drown almost immediately upon joining the server, and could make it much harder to escape spawn.

Retrieved from "https://2b2t.miraheze.org/w/index.php?title=Spawn&oldid=70445"
Categories:
Cookies help us deliver our services. By using our services, you agree to our use of cookies.