The Rusher War was a major conflict on 2b2t that took place during the summer of 2016 and ending in mid-fall of 2016. The war is highly controversial as many have varying opinions on the subject. Some claim that the war saved the server as it gave the server a long-needed "revival" (some say a little too much of a revival), as many players quit or migrated to Constantium after the early 2016 backdoor crisis. Others believed that it was nothing but staged YouTube drama and used solely to benefit the many YouTubers involved, such as TheCampingRusher and FitMC. The war was mainly between Team Rusher and Team Veteran, however they were also some smaller groups involved in the war such as The Resistance, and the Peacekeepers. The war took place from June 13th to October 9th, 2016.

Over the course of the Rusher War, there was massive slaughter of newfags by Team Veteran and other parties. The amount of Rushers killed is estimated to be 10,400 based on documented evidence. There may have been more Rusher kills that were undocumented throughout the server. 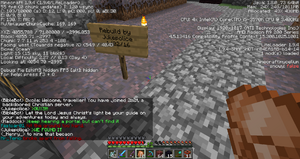 Although highly controversial, the Rusher War remains one of the most influential periods in 2b2t history. The explosion in player population, the creation of the queue, and newfound prevalence in the Minecraft community as a whole all occurred because of the Rusher War. Additionally, many events on the server have become chronologically defined by their relation to this era. Today, the impact continues in the form of many new players, a lengthy queue, and Youtubers such as FitMC.

Several people, including oldfags, believed that, in a way, the war saved the server as it gave it a new breath of life. During the spring of 2016, the server was experiencing one of its lowest points as many players left due to the backdoor scandal of late 2015 and early 2016. Many Valkyrian associated players claimed that Offtopia was paying the fees for the server in order for it to survive. This eventually changed when summer rolled around and massive swarms of players joined the server, in which donations and the queue began to help the server get off its knees.

The 2b2t community has currently witnessed 5 anniversaries since the beginning of the Rusher War and each year, various forms of 2b2t media posts memoires, memes, and shitposts relating to the war. Players have also created various war memorials. Since the end of the war, Rusher had only briefly returned in 2019, however nothing major came of it.

To many of the oldfags, midfags, and some newfags, the war was viewed as simply role-playing and a YouTube publicity stunt to get more attention on the server. Some do not even call it a war and believe that the many events portrayed on the most popular youtube channels were entirely fabricated and staged. The objective of Team Veteran to exterminate Rushers and get them off the server was also contested. Multiple theories exist of what happened:

The plot theory: This theory about the Rusher war, was that it was from the very beginning staged by TheCampingRusher and FitMC in order to make money off of the war in YouTube views, and to save 2b2t from dying. However this theory is very unlikely as before the war, Fit's channel was basically non existent, and this would be a huge gamble due to 2b2t being a very obscure server. Even after the war, Fit's channel was still quite small and didn't begin to take off until the 6th Incursion years later. Also even though Fit would later claim he and TheCampingRusher saved 2b2t, this was a lie by Fit to save face. As the backdoor crisis was only temporary and the server had already recovered from it before TheCampingRusher even made his video. In TheCampingRusher's very first video, around 20 to 30 players are online and active in chat.

The organic theory: This is the theory that the Rusher war was entirely organic in nature, in that Fit and TheCampingRusher where not working together at all, and instead where legitimate enemies. This theory is also unlikely as Fit and TheCampingRusher frequently showed up at spawn with their allies and fought each other, so at the very least, they had to agree on when and where to battle.

Retrieved from "https://2b2t.miraheze.org/w/index.php?title=Rusher_War&oldid=61684"
Categories:
Cookies help us deliver our services. By using our services, you agree to our use of cookies.