r/2b2t is a subreddit on Reddit created by Qasaur on March 25, 2012. Moderator roles were granted to 2builders2tools and CatWhisperer420 in June 2016. It is the only official external communications platform associated with 2b2t. As of November 27, 2020, it has 143,147 subscribers. 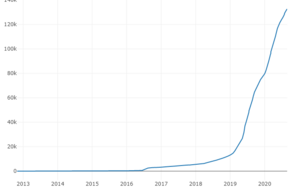 Subscriber growth of r/2b2t over time

The subreddit was created by a Reddit user named Qasaur on March 25, 2012. From 2012 to 2016, it was rarely used, and the go-to external platform for communication was Skype, as well as on Facepunch's 2b2t megathreads. During the Rusher Invasion and Rusher War beginning in June 2016, the subreddit became useful for coordinating updates with the community of thousands of new members. Thus, the subreddit became a platform that all players of 2b2t referred to for news from Hausemaster and posts about current events created by other players.

As more YouTubers became aware of 2b2t and created videos on it, the subreddit radically expanded in subscriber count, and, accordingly, the community of the subreddit became increasingly disconnected from the events of the server. Beginning with the influx of various YouTubers, Hausemaster began deleting posts seemingly arbitrarily and banning users for minute offenses, even banning Sato86, who was a frequent user of the Subreddit as far back as 2015. As of July 2020, the most upvoted posts, in general, are memes of vague relation to the events of the server, or posts pertaining to FitMC. Discord is the go-to platform for unofficial communication and is used nearly universally by all players of 2b2t as an alternative to the now-disconnected subreddit. 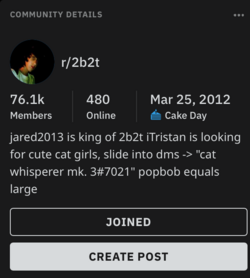 Subreddit backdoor, November 29, 2019
On Thanksgiving of 2019, the moderator account CatWhisperer420 was hacked by jared2013, househousehouse1, and Steve3. _Courier6_ was involved in the group as well, but was removed when he began leaking details about the hacking. jared2013 changed the password and gave it to fr1kin, who included the rest of Nerds Inc in the griefing.[1] Hausemaster took down the subreddit for several hours whilst restoring damage due to the griefing.

Retrieved from "https://2b2t.miraheze.org/w/index.php?title=R/2b2t&oldid=61806"
Category:
Cookies help us deliver our services. By using our services, you agree to our use of cookies.