Point Nemo is a destroyed base located on the 2b2t X+ World Border, constructed by the +X Digging Group. The base was griefed a single week after construction began, and completely wiped out in the following months.

The landscape of the area was generated in 1.6. The first known people who reached the area were Pyrobyte and iTristan on December 7th, 2013 (most likely with a backdoor). They left a bedrock platform on the other side of the border, with two signs, reading:

"iTristan was here. If you see this, shit went down"

iTristan also left the 121 book from the Mein Kampf collection, created by Victormeriqui, and a super weapon on the other side of the border.

On December 9th 2016, Byrnsy started a journey towards the very same place, thus formed the +X Digging Group. It was established that once they reach the World Border, they were going to build a base there, just like they did at other notable points. They named it Point Nemo, after the oceanic pole of inaccessibility - the furthest point on Earth from land, located in the Southern Pacific Ocean. 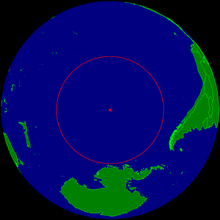 On March 26th, 2017, the first group of diggers - househousehouse1, xxq, irql, rasqi, miningminecraft, and several others - reached the World Border, and discovered Pyro's and iTristan's signs. They also manged to retrieve the Mein Kampf book.

As other group members also arrived, the building of the base started. On March 28th, when Byrnsy finished his journey, the place had already started to take shape. However, a day later, it was griefed.

On April 24th, Fit finished his own journey to the world border, and several of the former diggers, including Byrnsy, gathered at the partially repaired base as a formal welcome party.

On April 30th, the base was griefed again.

During May, the base was fully destroyed, and lavacasted beyond repair.