Old Town, also known as Judge Town, was a 2011 base founded by THEJudgeHolden and Offtopia, where Judge's Group was founded. It was one of the very few known independent bases during the times of the early Facepunch conflict. 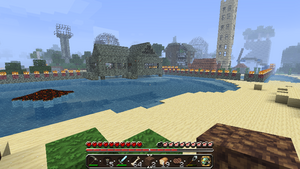 As seen in 2011 by THEJudgeHolden

When THEJudgeHolden began to play 2b2t, he went out 8,000 blocks away from Spawn to start the construction of Old Town. He eventually invited Offtopia and the two began building. Offtopia did not build as much as Judge did, but instead invited more players as the months passed. Offtopia eventually invited jdw99666 and Elocdrof from Spawn within the first month, who were clueless newfags at the time.

Eventually, Elocdrof began inviting real-life friends, such as marksman77 and willyroof. This made the group have a solid six members and continue this way for a while until the group decided to invite jdw's friends, bubbakennedy and square_digger.

The group was eventually attacked by popbob in November 2011, when he used his backdoor to destroy a large portion of the base using infinite TNT and his teleportation methods.[1]

The base was eventually abandoned by Judge's Group. The group continued to stay together at various bases up until 2013, during the rise of Valkyria.

The base was very retro in style, as it was built during the Beta days of Minecraft. Similar to many of the older towns on 2b2t, Judge's group only had a limited amount of selection in terms of blocks and so it was mainly built with sandstone, wood, cobblestone, mossy cobblestone, and stone brick. Offtopia also made a netherrack home as he liked to set them on fire, as netherrack burns indefinitely. He also built a large wall around the base in order to keep mobs out, as back in 2011, 2b2t's mob spawn rate was much higher.

Retrieved from "https://2b2t.miraheze.org/w/index.php?title=Old_Town&oldid=60013"
Categories:
Cookies help us deliver our services. By using our services, you agree to our use of cookies.