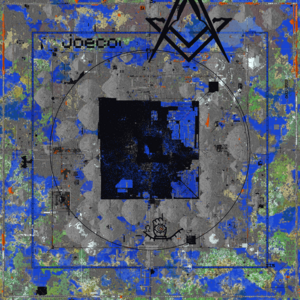 The end result of the first Obsidian Sky group as of November 2019, their original square had been griefed and the large areas on the right were never completed to begin with.
The obsidian roof is a large platform of obsidian above the spawn region of the Overworld. It is built at build limit (Y=255) for maximum impact.

The roof has been expanded over the years by many different players, groups, and initiatives, from just a small roof over 0,0 to its current status, which is a massive obsidian platform, mostly square in shape, of over 4.2 million blocks.

The first attempt at making an obsidian roof at spawn was done by the group Obsidian Sky. Their reason for doing this was so that it will make spawn more difficult by having newfags spawn under the roof, thus making it dark and harder to see for vanilla players without cheat clients. Eventually the Obsidian Sky group got bored, and only completed random patches of their goal which was a square from -500 to +500. 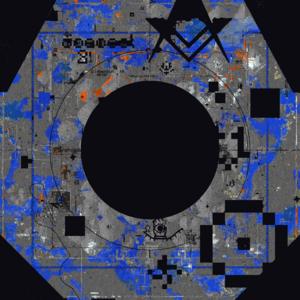 IronException map of the circle. We coordinated so that he took the world download right after we did a second pass, so that the render would look pristine with absolutely no holes. It worked! 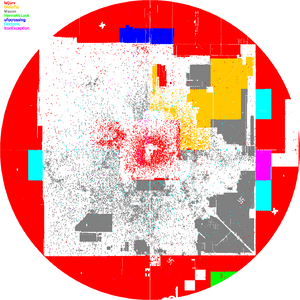 After building The Masonic Eclipse, the software was repurposed to build a circle at spawn. The radius was 710 blocks, so that it would extend the corner of the previous square (because 710 ≈ sqrt(2)*500). It was built in early 2020 and was about 800,000 obsidian placed to bring it from "square" to circle. The only reason was because circle in minecraft funny.

The 2b2t atlas map also uses the map as of when the circle was full. The black circle at the center isn't a mistake, it's an actual disc of obsidian in that shape.

The most recent extension to the obsidian roof over spawn was started by the Infinity Incursion in mid 2020. This attempt utilized a recently added "autobuild" module in Salhack which allowed semi-automatic platform building. Members of the II got to work, and within a few weeks, the roof was created. This extension was a square from -1025 to +1025 on both axes.

Retrieved from "https://2b2t.miraheze.org/w/index.php?title=Obsidian_roof&oldid=62971"
Category:
Cookies help us deliver our services. By using our services, you agree to our use of cookies.