NickHasCancer (aka NickHasBird) is a Midfag who joined 2b2t in February 2016, he is well known for his association with the SpawnMasons and Guardsmen, as well as the foundation of COVID-2147.

NickHasCancer first discovered 2b2t from a Motherboard Article that was linked to him while he was on a old chaoscraft forum. His first base was named Dick Tower, which he stayed at for a short period in early 2016. NickHasCancer then based with BenitoTortellini (aka Alien803) at his base. Eventually the two moved and built Tortellini City 1 and 2 in late 2016 and early 2017.

NickHasCancer founded COVID-2147 on March 9, 2020, as a place for members of the Spawnmasons to build during the quarantine due to the COVID-19 pandemic. After building there for several months, it was griefed by HermeticLock, D_loaded, Fit, and AlphaComputer, causing significant controversy. 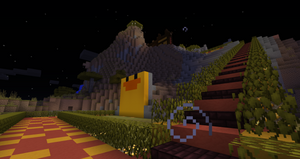 A facade in the style of NickHasCancer's skin, at COVID-2147 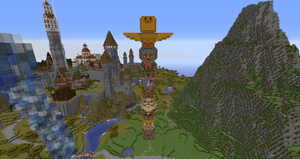 Breithan's totem pole at COVID-2147, with a representation of NickHasCancer on the top
Retrieved from "https://2b2t.miraheze.org/w/index.php?title=NickHasCancer&oldid=54022"
Categories:
Cookies help us deliver our services. By using our services, you agree to our use of cookies.