From 2b2t Wiki
Jump to navigation Jump to search
For the 2012 group of the same name, see Hitlerwood.

It began after chezhead, the leader of the original Facepunch Republic, returned to 2b2t in November 2019 and created the New Facepunch Republic. It initially started as a scheme by Armorsmith's Followers, but eventually it turned into a real group, thanks to the efforts of Sato86. The group quickly rose in numbers due to new players wanting to be part of a group with such old players. Although there have been a few minor downfalls, the group has continued to rise. 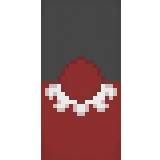 The story of the New Facepunch Republic begun when Armorsmith contacted chezhead through reddit and convinced him to return to 2b2t in November of 2019, to revive the republic. Armorsmith intended to create a new union of groups under chezhead's leadership, with the goal of uniting the server under the Facepunch Republic's name. He didn't want to lead such a union of groups by himself, so he intended to allow chezhead to be the public leader. Armorsmith worked with the player 0Neb on this project, and he became the co leader of the group. Armorsmith kept his involvement a secret. Their first project was repairing 2k2k. 0Neb designed the Discord server of the group, and recruited many new players. Old players from the original Facepunch Republic such as Isak were also invited.

Chezhead never really trusted Armorsmith, and after doing some research about him, he secretly arranged a voice chat meeting with Sato86, who made chezhead believe that Armorsmith wasn't to be trusted. He told Armorsmith's plan to all leaders of the group. This led to a drama which caused the departure of 0Neb who was the original founder of the in-game group, and Armorsmith, who orchestrated the whole faction.

After the drama, chezhead and Sato turned the project into an actual group and a hierarchy of leaders and advisors was quickly established, with chezhead as the President. A steady rise of new members revealed that this group was not going to dissolve like many new groups do. The group stayed active with a base led by each of the four leaders.

In February, chezhead announced the creation of the Vice President role. Due to real-life responsibilities, chezhead was unable to lead the Republic fully, therefore he made the leader Vab_ito into the VP to lead the Republic in chez's place. Soon, Vab handed the title over to OMEGAO000, who led as VP for the next couple months. Omega was soon going to leave, however, and the VP role was now in Jeffrey_214's hands.

In May 2020 many new projects started one, after another. The republic members participated in rebuilding Castle Hatehart led by Fredmodulars, but it was quickly found out. Another project was 8k8k - a base that was a tribute to 2k2k, and most of the builds in the base were made in Beta style intentionally. In the same month, The Republic began the rebuilding of Rhadamantis led by B0ris_Johns0n, and later joined by other members. After restoration was complete and players went inactive, the base slowly got griefed. The biggest project was SBA (Spawn Base Alpha) - a base that was supposed to be a meeting place for every group member. After Tabb0 completed the construction of the Great Hall (the biggest building at SBA), the first meeting occurred where the future plans for the group were discussed.

A small rebellion was established (which lasted no more than three hours after it was busted) where a player named Fredmodulars attempted to take over the Republic due to being angry at what he called, "inactive leadership." The VP at the time, Jeffrey, tried to doxx Fred after Fred had released Jeffrey's information across multiple servers in an attempt to gain leaverage within the group, Jeffrey was later framed by modulars, which caused his removal from the the VP role, and later his departure from the Republic. VillagerFilms was chosen to become VP by Fred and his supporters as he was willing to allow Fred and his supporters to violate the groups code under the pretense they would keep radically supporting the groups campaigning and propaganda efforts.

During June 2020, a new base named Corinth rose and brought the best builders in the group together to make the most ambitious base in the group's history. Quickly new builds were made such as the reconstruction of Romes Colosseum or the Grand Tree. On 21 June, the base was found and griefed by a newfag named Tr0pic, but its members quickly created a new one. One of said members got their account hacked by a member of Emperium, threatening the safety of the base, but quickly created a new one. The base is safe.

July 2020 saw many changes in leadership and comebacks. At the beginning of July, ancientfag Isak became active again, prompting a large group meeting to take place. Just a few days later, OMEGAO000 came back to the group with new ideas and projects in his mind. VillagerFilms resigned from his position as Vice President for Omega peacefully. On 9th July 2020, a big Facepunch Logo was made out of obsidian at Spawn. Participants were promoted to higher ranks. Omega decided to host Karaoke Night on Voice Chat to make discord server more active. Karaoke Night was the biggest Facepunch meeting. At its peak 18 people were on Voice Chat.

July also saw a few anti-facepunch groups rise and inside the group. Fredmodulars was a member of many and griefed some of their bases, but he later "quit" and is rumored to rejoin again like he has done before. This insiding crisis and other smaller problems kickstarted chezhead into reorganizing the NFPR into the Facepunch Federation.

On July 23, 2020, the New Facepunch Republic was reformed into the Facepunch Federation. The hierarchy of the original group was altered, and new divisions were formed to create a more stable and more powerful group. The Vice President role was removed, and most advisors were given one of the six new branches of the FF. This change will benefit the Federation and help it become a stronger force in the 2b2t community.

At the end of August and September the group saw major decay. Because many people joined Facepunch in times of Corona, many members and some high rankers became less active. Advisor that did a lot for the group known as Russian Roomba left the group for personal reasons. Small drama rose inside the group when one of the active members - CattynGMD actually helped in griefing Bedrock Comet. Because he had already been on a second chance after him breaking a rule earlier, he was ultimately removed from the group. 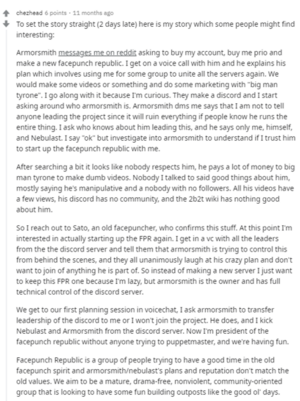 Chezhead's return story, showcases the problems Armorsmith caused to him.

The New Facepunch Republic has been inactive for nearly a year now, a small effort was made in November of 2020 to attempt to increase activity in the group, this was not fruitful, ultimately the group remains very inactive with a small discord presence, but beyond that it would take significant work to increase group activity. The Facepunch Federation change was ultimately was not successful and was rolled back, the group retains its original name.

Note, the following are Discord Usernames

Retrieved from "https://2b2t.miraheze.org/w/index.php?title=New_Facepunch_Republic&oldid=62006"
Categories:
Cookies help us deliver our services. By using our services, you agree to our use of cookies.