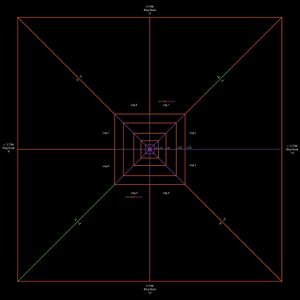 Map of the Nether highway (without spawn region highway section) system as of 3 December 2021 created by FreedomHolland
Nether highways are a series of highways on 2b2t running from 0,0 Nether. The highways have a distinct design and a not entirely documented history. Maintenance of the highways is done by various groups as well, and they are the most prominent source of travel on the server.

2b2t’s nether highways are known as a safe and fast method to travel since one block in the Nether equals eight blocks in the Overworld. The highways are made out of obsidian to avoid griefing. The highways consist of flat blocks to walk on and two guardrails, one at each side. All highways start at spawn (0,0) and are dug until the Overworld world border. The straight and diagonal highways are paved until at least 1m nether.

It is common to see many players on the highways, both maintenance personnel as well as travelers to or from spawn. Highways near Spawn are usually always destroyed or obliterated due to the chaotic nature of 2b2t's various spawns. Multiple spawnfags fly idle, waiting for unsuspecting newfags to come into rendering on the highways to massacre them.

Digging, building and maintaining highways is done by several groups. Most notably are:

The highway is fairly well maintained with a obsidian floor from 50-100 of 0,0 in the nether to -129,580. After that, the highway is primarily made out of netherrack with many potholes, and varies in width from 5 to 1 blocks. The -Z nether highway reaches -3,750,000 which connected to the world border in the overworld.

On August 7th 2017 gRiNdLoRd successfully flew under the nether floor from spawn out to -3.75 million. He was able to get back above the bedrock, build a nether portal and reach the -Z world border before the -Z highway was completed. Two days later there was a plug-in installed on the server to prevent players from flying under the nether floor. He still has an account there and continues to play around there.

The -Z nether highway is heavily maintained by IIS (Independent Interstate Society) and also to a lesser degree by SIG (Spawn Infrastructure Group) which maintains a high standard for the nether highway until 0, -128,000. The highway consists of 4 wide obsidian blocks with 1 wide guardrails on each side and 3 blocks high just below the bedrock roof. The IIS repairs most griefs on the highway, which make the -Z nether highway ideal for elytra travel.

Ring roads encircle 0,0 in a square shape, hence their name. Dozens of these roads exist at various intervals. They are used for traveling out from the main axis or diagonal highways to more remote areas. They are also commonly used to avoid 0,0 by going around it. For most of their existence these were just bare Netherrack tunnels, sometimes 1x2 sized. In their obsidian form, the larger ring roads around 5K, 10K, 15K, 25K were originally constructed by the Independent Interstate Society (IIS), and are now expand by the Motorway Extension Gurus (MEG) and maintained by the Highway Workers Union (HWU). Meg added more ring roads further out such as 125K,250k,500k,750,1million,3.75million (worldborder ringroad) connecting all axis world border monuments and world corners to one another.

The -4444 Highway starts at the coordinates 0x -4444z and goes in the eastern direction. It extends for more than 2 Million blocks in the overworld and several bases were built on its overworld side. It was probably constructed before the Rusher War. This highway is famous among the old players.

Together with the +X Axis Nether Highway, it is the longest road on 2b2t.

The Highway dug by the X+ Diggers starting at the X+ World Border (Point Nemo) and goes for 30,000,000 Overworld blocks to the X+ Z+ World Corner (Point Less) become known as the first highway to connect an axis world border base to the world corner. This Highway also has many monuments and milestones. It is currently a part of the 3750000 ring road.

Since 2019, many withers have been placed from 0 to 50k. However, all of the potholes from the withers have been restored by the IIS and the withers remain on the floor of the nether. As of June 2020 the highway is in great condition and the withers place no real threat towards any traveler. You got your spawn groups who are active, hunting every one at 0,0. You got an occasional player who will block a highway or destroy it, but this is fast rebuild by HWU.

SalC1: The Longest Road Ever Built in Survival Minecraft (The 2b2t Nether Highways), May 30th, 2020

Retrieved from "https://2b2t.miraheze.org/w/index.php?title=Nether_highways&oldid=63682"
Category:
Cookies help us deliver our services. By using our services, you agree to our use of cookies.