Negative Fourhundred Eighthundred (NFE) was a spawnbase and sanctuary, thought to be originally built by a Facepunch user and the early home to xcc2 and alex02028. Today, the majority of the spawnbase is encased in a giant lavacast, but there are some features that can be made out and are still standing today.

In 2020 the base was repaired and griefed.

Note: The following information is taken from a Reddit post by base member xcc2, which can be read, with images, here. 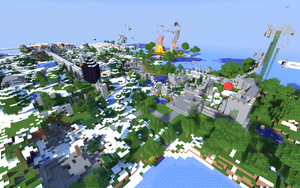 NFE was started in early 2011 by Pimpmastaflex and possibly other anonymous Facepunch players. It started as a castle and was presumed to be abandoned by xcc when he arrived at it. xcc2 repaired the castle along with another player named alex02028. Months later, many players had heard of the base around the server and was a popular attraction. xcc and alex02028 offered food and gear to new players who came to NFE. Due to the base's popularity and proximity to spawn, NFE was repeatedly griefed and repaired. In one case the base was covered in a lavacast, the creator of which fell to their death after the cast was removed. x0XP and Cold_Storage77 eventually aided alex and xcc in defense with x0XP later naming the base. Finnish griefers named Pyylaandia repeatedly griefed NFE, repeatedly destroying the base to such an extent as to cause alex02028 to permanently leave the server and xcc2 to move to other bases such as Plugin Town The base was completely destroyed after the introduction of withers.[1]

The base originally had a four-pillared castle connected by walls, with one pillar extending up to 128, build limit at the time. The base, through efforts by xcc2 and alex02028, gained an aqueduct, drum tower and arched double towers topped with red wool.

Retrieved from "https://2b2t.miraheze.org/w/index.php?title=Negative_Fourhundred_Eighthundred&oldid=50375"
Categories:
Cookies help us deliver our services. By using our services, you agree to our use of cookies.