Negative_Entropy is a player who is well-known for his spawn projects (including his Coordinate Quests and the Spawn Train), his prominent role in the Spawnmasons, and the numerous bases at which he built. 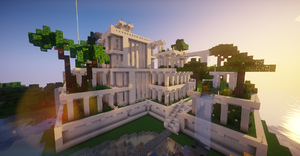 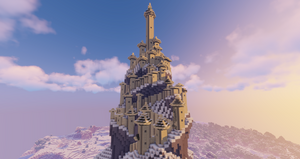 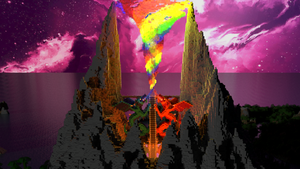 Negative_Entropy joined the server in June 2016, after learning about 2b2t from TheCampingRusher's first video. He escaped spawn using the Southern Canal and farmed apples to survive. After making a little outpost to stock up on food and pickaxes, he walked through the nether to his first base location. He settled at the coordinates 314159 271828 which are both irrational mathematical constants, Pi and e respectively. He built there alone for a good while before returning to spawn, as the "singleplayer with lag" playstyle got boring quickly. At spawn, he made numerous buildings and farms, and met new players and old players alike. He went to the End preparing for Java Edition update 1.9, which brought shulker boxes. He duped items at the time using the 11/11 Dupe, and collected 60 shulker shells and then /killed back to his base. He used those shulker shells and other items he had grinded for to make his first kits with the following donkey dupe. The only kits that got spread were the diamond Entropy kits, the Chemistry Sets for brewing and iron armor Make Spawn Green Again kits, which he would give out to new players at spawn. He preferred to hang around at spawn because he liked to show his builds to random visitors. One day at spawn he found another player named Flip350, who was making the first water cube at spawn, and decided to help him out. After this was completed, Flip invited him to a base, and from there they both left to a Tavux base called Callisto. Following this, NickHasCancer invited him to the SpawnMasons. 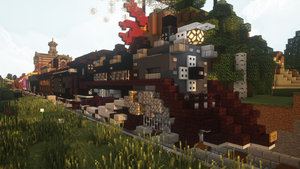 Negative_Entropy was initiated as a member in April of 2017. He mainly made lodges, built at some of the group's bases, and got to know other members. Halfway through 2017, HermeticLock disbanded the group, and like many other members at this time, Negative_Entropy felt quite lost playing alone. After a month, a new discord server was made, reviving the group and its remaining members. He was voted to worshipful in November of 2017 and currently runs the group together with Todarac, ufocrossing, leijurv and l_amp. He has been a part of many notable bases since he joined the SpawnMasons, including Boedecken, Valinor, Cloud Club, Mu and COVID-2147. He built around 25 weekly lodges, was the main builder at Smibville and Chunk Haven, and placed obsidian for the first masonic logo and the Masonic Eclipse.

Negative_Entropy may be best known for his involvement in spawn projects. Even if the projects are SpawnMason-centered, the wider community is often welcome to participate. The oldest ones would be the Coordinate Quests, in which people need to solve clues to progress through stages. Ever since 2016, he constructed a decorated, submerged Christmas tree at the center of spawn to leave behind gifts to random people. Negative_Entropy built the Western and the Northern air temples from Avatar:TLA as SpawnMason lodges, after which he tried to get as many people on the sign boards before they got demolished. The Nationwide Transmutation Circle was a group project he led, inspired by the anime Fullmetal Alchemist: Brotherhood, in which a 10-km wide tunnel and 10 cities were built. He also organised the Great Spawn Train, which was a long train track, that would let people attach their own cars. His builds and community spawn projects have made him both a well-known and respected player on the server.

Retrieved from "https://2b2t.miraheze.org/w/index.php?title=Negative_Entropy&oldid=62227"
Categories:
Cookies help us deliver our services. By using our services, you agree to our use of cookies.