No Server November (NSN) is an annual tradition led by the Brownmen in which many players come together to lag and crash the server every day of November, as a reference to No Nut November.

No Server November was founded by players that had their priority queue removed by Hausemaster after they book banned over 400 players at spawn as part of the Book Club's actions on Halloween 2019. Those who had their priority queue removed logged in from alt accounts or just waited in the normal queue, and as revenge, decided to attempt to lag and crash the server every single day of November, through the creation of many lag machines. This event would turn out to be a big success and because of it, the Brownmen decided to do it every year in November.

The leader of the Brownmen, househousehouse1, designed a lag machine that involved large amounts of Redstone dust platforms and observer clocks powering them, because of their previous knowledge that redstone dust is extremely laggy in large amounts in all versions of Minecraft. This machine could take the TPS to less than 0.6 with enough layers. Hausemaster disabled redstone clocks in order to combat this lag machine which made so the observers would automatically break when you activated the machine. The other design for a lag machine they used involved large amounts of sand. They used a method to keep the sand as a floating falling block. This lag machine like the one before was also extremely powerful. It was able to take the TPS to about 2 with a bit more than 5000 floating sand.

Other than lag machines, they also used an exploit that they called "Snowcones" to crash the server or mass-kick players in order to skip the queue. They skipped the normal queue on already banned accounts so they can build lag machines with those accounts again. They constantly crashed the server during peak hours to the point where it was completely unplayable. Because of the low tps and the number of times the server had been crashing, people would become frustrated and less active, which reduced the normal queue to ~200 and the priority queue was instant for months. Fewer people bought priority queue, which hurt Hausemaster's wallet, so the operation was considered a success. Brownmen was the group leading the NSN operation and most members came from there. This group is one of Brownmen subgroups/projects, and it increased their relevancy on 2b2t a significant amount, making them known for their lag machines and many exploits. 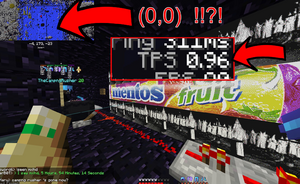 List of accounts that were priority banned from NSN 2019 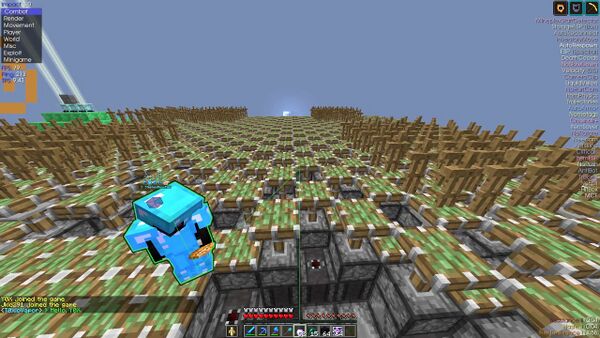 This NSN event was quite different from the previous year. The whole project was much more organized and had a large public discord server. The Brownmen were more prepared this year, as they had a design for a lag machine, a queue skip, and a boat exploit that allows them to kick players. In the middle of November Hause patched their queue skip, but they managed to come with a new one at the end of November.

At the beginning of the month, the Brownmen sent a list of demands to Hausemaster and said that they would stop the lag if he agreed to the demands. Most of their demands were about the server not being vanilla and the countless problems the server had over the years that Hause didn't bother to fix. Hause did end up fixing some of the broken vanilla features, including elytra, and he removed all priority queue bans, but many of the demands were not met. Unlike the previous year, queue size did not decrease by any substantial amount over the month.

The Brownmen used boats to kick players from the server, with more than 500 "boat bans" recorded. When a Minecraft player is standing for a few seconds on more than 5 boats the server believes they are flying and kicks them. This worked because Hause had disabled /kill so players couldn't escape.

The first lag machines used in NSN 2020 using redstone clocks and pulses. But after OxeeF showed the lag machine off in a live stream, Hausemaster enabled the Anti Redstone plugin that would cause redstone and, accidentally, had the same effect to seeds. A side effect of this was a very small redstone dupe showed off in this video by SalC1.

The initial lag machine the group wanted to use in November (hhh1's design) stopped working on day one as Hausemaster disabled redstone clocks. In the middle of November, Redstoner2b2t managed to find a new design for a lag machine involving a massive amount of slime blocks and 0 tick pistons, and called this machine the EMP machine. With this machine, they managed to lag the server to the point where it completely stopped (20Tps to 0.00Tps in 1 tick). As of December 2020, this design is still being used to crash the server.

The Brownmen ran a queue skip service in the NSN discord for people who had banned accounts or didn’t want to pay hause and even people in prio. It was ran every few hours and lots of people got into the queue when it was announced. When started, it would skip you 50-100 spots at a time, taking around 5 minutes to get through normal queue and less than a minute to get through priority queue. Players queue skipping had to spam “/queue main” into their chat to avoid being kicked out like everyone else was. This was patched around the 8th of November with bypasses found later on. Alot of the NSN members didn’t even buy priority queue and solely relied on this service.

At one point, the Brownmen built a lag machine near a Fight Club event, which triggered Hause's auto priority ban plugin. Hausemaster's PayPal account was spammed with complaints, which led to the account being temporarily disabled, and no one was able to purchase priority queue for a couple of hours.

The Brownmen decided to attempt to lag and crash 2b2t whenever Fit was streaming. They managed to kick him back to queue every time, which made it much harder for him to stream.

Retrieved from "https://2b2t.miraheze.org/w/index.php?title=No_Server_November&oldid=50331"
Categories:
Cookies help us deliver our services. By using our services, you agree to our use of cookies.