Mu, also known as Mu Megabase, was a large group base founded in 2017.

After the griefing of Summermelon in May 2017, the Melon Group was left homeless. Around this time, the Nether Highway Group was nearing the end of their dig to the +,+ world border. Since Offtopia and Willyroof knew many members of both the Nether Highway Group and Melon Group, they, along with Joelik, started drawing up plans for a base with members from both groups. After the NHG reached the border, the members joined the Melon Group, as well as some members of the Southern Canal Corp, to come up with ideas for this new base. During this time, Auion, a member of the NHG, discovered the chunk dupe. Since only a few trustworthy members of the group knew how to perform the dupe, it was kept secret for roughly a year before the rest of the server had it. After the dupe was discovered, the plans for the base expanded greatly in scope. Offtopia came up with the name Mu, after the mythical lost continent of the same name, and provided the base banner. A location was decided on, but after coords were accidentally leaked, it was left as a decoy and a new location was chosen. A final plan for the base was agreed on, consisting of a large circular basin with terraformed terrain surrounding a huge mountain, with canals and themed “districts” around the edge. 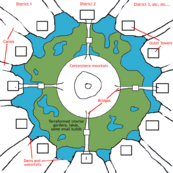 The original plan for Mu. Note the canals and themed districts, which never ended up being built.

After most of the members arrived at the building site, work started on the central hole. To speed up the process, the base members utilized two layers of flying TNT dupers in order to clear the jungle terrain and carve out the basin. The original plan called for the basin to be 1600 blocks in diameter, but it was scaled down to just 1000 blocks in diameter due to the sheer scale of the bomber project. After the hole was finally carved out, it was filled with a layer of grass, which required multiple dubs of shulkers of grass blocks. After that, the central feature of the base began construction; Mu Mountain, which was designed by Toshie and built mostly by Scribblefoxx, along with help from Totaldarkness, Offtopia and Oldschoolgamerx, was built between February 25 and April 7th 2018. In October 2018, after the chunk dupe finally went public, ThebesAndSound created large stashes that could hold massive amounts of resources. One of these stashes was eventually world edited out by Hausemaster after it created a large amount of lag. The base was relatively inactive for most of 2019, with many members getting burnt out by the sheer scale of the project. However, in early 2020, Scribblefoxx invited a few new members to the base, including some former members of Valerian. This breathed new life into the base, and new plans started to be drawn up for the future of Mu. However, after the account exploit of late February 2020, during which many well known members had their accounts logged into, the base was compromised. After transferring most of the resources from the stashes, the base members filled the central basin of Mu with water to make griefing more difficult, submerging the base just as the fictional lost continent of Mu supposedly sunk beneath the waves. Many aspects of the original plan, including the canals and themed districts, were never fully realized. After the base was compromised, Byrnsy revealed the base to the general community on the subreddit. 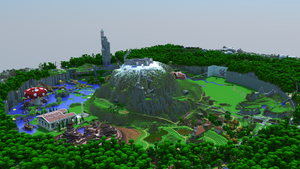 The central area of the base 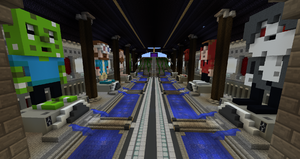 There were many large builds constructed at Mu, both inside and outside the main basin.

A large hallway featuring statues of every base member. The design of the statues was taken from old Mindcrack videos, and each one had a sign with the player’s name and the date that they arrived at Mu. After Hausemaster removed one of the stashes at the base, he was also given a statue as a joke. 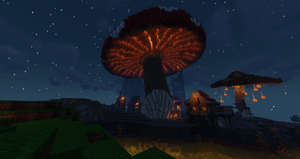 The centerpiece of this area was the massive red mushroom, the underside of which lit up at night. It also included smaller mushroom builds, a village, custom caves and trees, and layers of glass under a river to give it a foggy look.

This area featured a large temple that housed a massive Nether portal created using the chunk dupe, which eventually broke. This area also contained a Greek-style trireme and a large sandstone obelisk.

Various different biomes were built around the central mountain, including a mesa made by Scribblefoxx, who also made a small town built into the inside of the mountain, as well as a couple of other villages in the basin. General terraforming work was also done around the mountain. 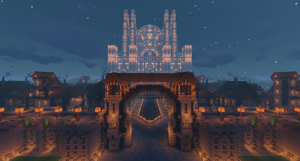 The Temple of the Melon Goddess

Temple of the Melon Goddess

This massive temple built by aaron_alvin and dedicated to the Melon goddess sits just outside the basin and features a large statue inside, as well as the names of previous Melon Group and NHG bases written on its walls. Just outside the temple is a small medieval village.

Offtopia built a large tower reminiscent of his tower at the New Rainbow Islands just outside the basin. He planned to finish it with 1.13 blocks, but the update never came within Mu’s lifespan.

l_amp built a large floating house made of dark oak inside the basin. Various other houses in many different styles were built within the central basin.

aaron_alvin designed a castle that was to be built on top of Mu Mountain, but it was never fully completed. 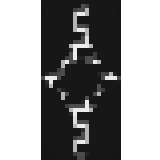 Mu banner
A large pixel art mural of the Pokémon Mew was built on one of the walls of the basin by l_amp. Mew became Mu’s unofficial mascot due to the obvious similarities in their names.

A Christmas village was built in 2018, complete with a Christmas tree, candy canes, a statue of Santa, red and green variants of the Mu banner, and a tower made of ice, stained glass, and sea lanterns.

The twelve canals from the original designs of the base were never completed. Some were dug out, but none were ever filled. If they had been completed, Mu could have been roughly 5k blocks in diameter.

The Mu Grand Pearling Arena was built to house portals leading to towers where ender pearls could be set. Each member could claim one of the 40 towers and throw three pearls that could be loaded later.

A large ghast was built by TwinkleTard to house the main member board.

The final build completed at Mu was the roof of the Nether hub, designed by l_amp.

Imgur album and history of the base

Offtopia's video of the base

Retrieved from "https://2b2t.miraheze.org/w/index.php?title=Mu&oldid=61667"
Categories:
Cookies help us deliver our services. By using our services, you agree to our use of cookies.