MrCK10, also known as "Merick" was a player that started playing 2b2t during the Rusher Era. He then quit in early 2017, and later re-joined in late 2018 and has played ever since on a regular basis. He was Emperor of the Imperials from late 2018 to mid 2019. In his time he expanded the Imperials to having 200 members. MrCK10 has kept a lot of history of groups such as the Imperials.

MrCk10 escaped spawn easily and travelled to 100k overworld on the X- highway. He eventually found a stash and was able to fill up his ender chest with gear. He went to create a base not far from the stash so he could still use it for gear. This base was griefed in a month. After this, MrCK10 joined a group called the The Imperials and was invited to a recruit base. Here he built a few huts, but it was griefed 2 weeks from it's founding. MrCK10 was trusted by his higher ups so he was able to progress in The Imperials quickly and eventually becoming a governor (same as centurion) for a 2b2t clone known as reconnectmc.com. He then quit 2b2t for the rest of 2016.

Merick didn't play 2b2t much in this time but still logged in occasionally to help build at the Imperial City on 2b2t.

Than in late 2018 he logged back in to meet up with the last reminisce of the 2b2t Imperials to try and revive them however this failed.

MrCK10 created a small base and stash with BeeZIsCool, OneMoreBlock, ShekelCollector and Imemes for the Imperials. However the stash was found as it was only 75k from spawn. All of the members besides mrck10 quit imperials. However MrCK10 met players such as Brickzeebra and DavidPyrian which allowed him to expand imperials back to 2b2t. MrCK10 got into some drama with SolidColled, Takeouts and Fin_Fry which started the pedolarper controversy. MrCK10 was caught in a controversy after failing to delete alleged child pornography posted by Finn_Fry in his discord server, since MrCK10 knew it was not child porn and simply nsfw, this was latter proven to be correct, as the picture was taken from Tim_McNukepants' girlfriend (who was legal). MrCK10 from that point started causing drama with many other 2b2t players.

MrCK10 also constructed a small base for the Imperials on 2b2t known as Karthwasten, which had 4 other members, only 1 is recorded (DimondRanger856) 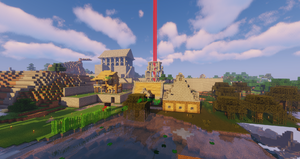 Karthwasten built by MrCk10 and other recruits

MrCK10 is now a youtuber which makes 2b2t content. He makes informative videos on 2b2t politics and drama, he also make 2b2t satirical content from time to time.

The Imperial Bible - A massive text on the history of the Imperial Empire.

The Imperial Manifesto 2020 - Updated version of the earlier instalment.

The Imperials Manifesto 2019 - Text underlying the Imperial ways and traditions.

You can help the Imperials by expanding it.