The Motorway Extension Gurus (MEG) are a Nether highway mining group on 2b2t. The central objective of the group is to extend the existing highways which have been built by previously Independent Interstate Society (IIS) and independent players. The members of MEG are tasked with digging tunnels that extend to the overworld world border of every cardinal direction (and their diagonals) which facilitates easier cheat-assisted travel. Ultimately, this allows players to travel between spawn and different regions of the nether with relative ease, and makes previously unreachable regions significantly more accessible.

The group digs at a minimum 3x3 tunnel size (3 wide, 3 tall), but has started recently to dig exclusively 6x4 to facilitate easy cheat-assisted travel such as ElytraFly, BoatFly, and EntitySpeed. 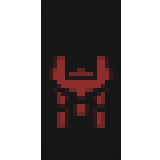 On October 15, 2019, Citadel2222 was on his way to the -X, -Z world border, and made a stop at -5M, -5M to check if any structures had been built. He flew around the area and stumbled upon a player named illville502. Both individuals expected immediate death; however, neither were hostile and so forth a friendship began.

The two players decided to build a milestone at -5M, -5M, due to there being nothing more than a small sign wall. For two weeks, they built a large milestone. This cooperation between two strangers on this relatively unmaintained highway was a significant achievement.

The two players decided their next project would be to extend the -X, -Z highway (which to their knowledge ended at -4M, -4M). However, upon re-entering the nether, the highway had suddenly been dug. Both players were understandably confused, so they followed the extended path and left multiple signs at the end in an attempt to contact the unknown individual. This individual was revealed to be VeryVon, who had completed this section of the dig with his custom digging bot. The three decided to band together to dig to the -X, -Z world border using this bot. It was on this date, November 28, 2019, that the Motorway Extension Gurus was formed.

In the months that followed, three more individuals stumbled upon the founders during their dig to the world border — they were DantezWrath, KevinKC2014, and harritaco. They supported the project and wanted to help, and were the next additions to MEG.

Upon completion of the -X, -Z world border dig, the group received a huge influx of people interested in digging nether highways, especially after well-known 2b2t YouTuber SalC1 released his video about the project. Most notable of these new members were Jonanen, Paragon, Kurakuea, and Parzi. They joined in May and June 2020, and started working with them on the remaining three diagonal highways. The first of these new digging projects was completed in the span of three months and was primarily dug by harritaco, Jonanen, and KevinKC2014, who were all digging nearly 24/7. The project was completed on September 4, 2020. The process was rather slow due to an older version of Baritone that had not been fine-tuned and was missing a few features.

In late July of 2020, tycrek discovered a massive stash belonging to a shop owned by the reputable player ufocrossing on one of the highways. Being a very new player with no need for the absurd amount of items, he donated the stash coordinates to MEG to assist with future projects. At the start, the group decided to just steal crucial items, such as pickaxes and golden apples. However, partway through the operation, a member of the group, maksitaxi, leaked the coordinates to the group Infinity Incursion. Upon learning about the leak, MEG decided to self-grief the stash as it had been compromised, so as to take away the satisfaction from the Infinity Incursion. They kept it a secret from ufocrossing, but a member of the group messaged ufocrossing about the grief. This caused the first member in the history of MEG to be kicked out of the group, because MEG did not want a bad relationship with such a well-known player. The reputation between ufocrossing and MEG was terrible after the incident, but due to MEG holding a low profile, this has mostly been ignored, and they retain a good neutral relationship with the majority of groups on the server.

Upon the completion of the +X, +Z world border dig, the dig bot was further optimized and the diggers learned how to use it effectively without disruptions for longer periods of time. This meant the remaining two diagonal highways could be completed at a faster pace with more dedication and insight to the process. Several more notable diggers joined the digging team in late summer of 2020, consisting most notably of Yesnik, Jenixblue, and ToxicAven, all of whom have contributed massively to the digging process. On October 14, 2020, the third diagonal highway, +X, -Z, was completed to the world border, dug out by the now well-known diggers illville502, Citadel2222, and tycrek.

The dig of the final diagonal highway, the -X, +Z highway, was hugely delayed, severely impacted by Elytra hacks being patched on September 4, 2020. The dig was also slowed due to block-breaking not working as intended on the server, until a member decided to email Hausemaster, who was able to fix the problem and improve digging speeds. At the start, the project was slow-moving, though it quickly picked up pace, as members of the other highway digging crews began joining in on the final dig. Being only halfway in after 3 months, the pace really picked up after New Years', and it was completed on February 12, 2021. This marked the date on which all diagonal highways had finally reached the world border on the server.

Due to the growing size of the group, MEG expanded its ambitions in late July, and started working on more projects at once. Most notable of the completed projects include the +X highway expansion; and the digging/paving of both the 125k and 250k ring roads. The 500k ring road was also completed on August 7, 2021, though unpaved.

The Highway to Connect Them All

With 2021 came the release of an extremely powerful and fast highway tool known as Highway Tools (developed by Constructor). After benchmarking this new tool and the old dig bot, MEG decided to try and hit 1 billion total netherrack dug before the end of 2021. However after only partly through the year, MEG hit 1 billion on the 17th of May 2021. It was joked around in mid-2020, but MEG realized it has the capabilities to dig the World Border Ring Road within a reasonable timeframe. That is, with the aid of the new Highway Tools from Constructor. So near the end of 2020, MEG started the project by assigning different “legs” to all diggers. This would be the biggest project in 2B2T history, with over 720 000 000 netherrack being dug and thousands of hours being dedicated to the project. As of June 1st, the project is still underway.

The Highway to Nether World Border

Once a lone digger; Hare_Hare_Yukai took the massive project of digging road to the +X nether world border into his own hands. He began digging a 1x2 tunnel which was parallel and 28.5k blocks away from +X highway. He documented the entire journey in detailed report, while also experimenting with the fastest way of digging. In the end, he got to around 300k nether per day (which is about 3x as fast as a normal 6x4 tunnel). Upon reaching the world border, Yukai asked to be part of the MEG crew, which was accepted with delight.

The diagonal highways extend from 0,0 in each of the four diagonal directions (northeast, northwest, southeast, southwest) to the overworld world borders. Diagonal highways are 5.3 million blocks or 5,303 kilometers long. 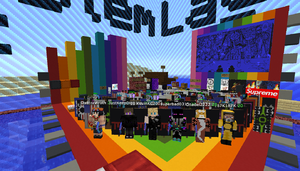 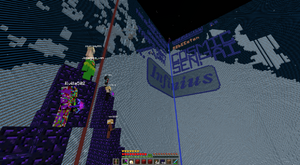 This was the servers second completed diagonal highway, which was dug from spawn to the +X, +Z world border. This dig was completed by KevinKC2014, Jonanen, harritaco, Paragon, and 5K5K.

This was the servers third completed highway, which was dug from spawn to the +X, -Z world border. This dig was completed by illville502, Citadel2222, and tycrek.

The fourth and final highway was finally complete in 2021. The completion of this highway marks all diagonal highways finished to the world border at MEG's 3x3 minimum tunnel size. This dig was completed by Roy4lRondi, tycrek, Citadel2222, Juderenee, and Frencheagle. 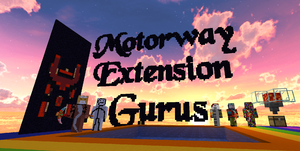 Kurakuea from MEG at the +X world border after completing the widening project on the 26th of September, 2020.

This dig was completed by Kurakuea.

The first cardinal direction be widened for paving to 6x4, previously only 1x2. Originally the widening project was started by 2 Highway Workers Union workers, but within a week the project was halted as the 2 workers disbanded. The project started getting traction again after the completion of the 250k ring road, as Harritaco started digging it. Yesnik soon joined in on the action as well, along with the newer member of MEG, FreedomHolland.

Ring roads makes it easier to travel as you can travel between each of the eight highways very easily and get to specific coordinates with minimal independent travel in open nether. MEG has focused a lot of attention on these ring roads as they are essential for fast travel on 2b2t.

After completion of the -X -Z highway, MEG created the 125k nether ring road, which equates to 1M overworld. The dig was started on the 9th of June, 2020.

Once the dig was completed, MEG (along with HWU) started to pave the 125k ring road on the 19th of August, 2020. This project would use 5 million obsidian and took 5 months. This dig was completed by Harritaco, Paragon802, CorruptedSeal, illville502, and DantezWrath.

Along with the last diagonal highway being dug, MEG raised its ambitions to dig out yet another ring road. This time it would be at 250k nether, or 2 million blocks overworld. This project required 18 million netherrack to be mined. This dig was completed by Harritaco, Jonanen, and Paragon.

Motorway Extension Gurus has (as of 14/04/2021) dug 709 686 971 netherrack. This total is spread across 18 diggers. Since the inception of the group (October 15, 2019), that equates to 38 950 netherrack per hour. On average, 6.8m netherrack is dug out per week, as can be seen on the chart to the right. These stats were pulled before the group implemented Highway Tools. Since this has been implemented, the numbers have syrocketed!

MEG has spent over 3,000 hours on each highway, adding up to nearly 12,000 hours of digging. This is excluding the 2 ring roads and the cardinal highways which MEG has also helped to dig. 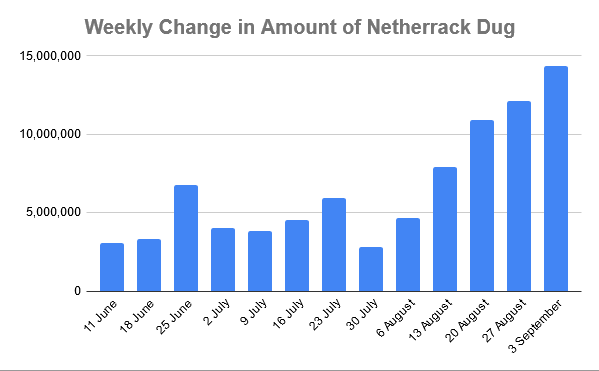 MEG netherrack dug per week, as of 3rd September 2020
The most influential diggers with the highest netherrack count are as followed:

On May 29, 2020, 2b2t YouTuber SalC1 uploaded a video titled "The Longest Road Ever Built in Survival Minecraft (The 2b2t Nether Highways)". The video highlights the accomplishment of reaching the -X, -Z world border corner, as well as the group's plan to extend the remaining highways.

On March 29, 2021, the YouTuber Fastvincent1 uploaded a video about the group, titled:" How a 2b2t group revolutionized diagonal nether highways". The video showcases the group's achievements and history, going into detail about how the group has evolved since the completion of the initial -,- highway.

Retrieved from "https://2b2t.miraheze.org/w/index.php?title=Motorway_Extension_Gurus&oldid=59382"
Categories:
Cookies help us deliver our services. By using our services, you agree to our use of cookies.