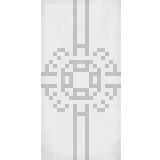 Lotus City is a 'franchise' on 2b2t in a way, which started off with the White Lotus Society, founded by elijah204 and Pat_The_wizard. Together, they created bases in the greater spawn region that they would name 'Lotus City I', 'Lotus City II', etc. Once a base was 'complete', they would release the coordinates to Reddit, receiving usually over a thousand upvotes within the first couple hours. 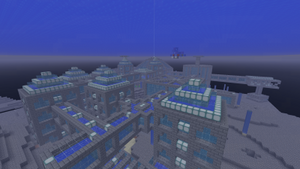 The very first Lotus City, even though having the most active player base consisting of 8 players who had all built at least one thing at the base, was not the most outstanding of all the Lotus Cities' made so far. It was not organized in any way and there were a lot of ambitious projects that were half-heartedly only started. One of the 3 people who streamed themselves building at the base on twitch, HandyCorgi, began making the underwater city of Rapture from Bioshock in this base where there wasn't much space to do so. It ended up being small and derpy looking, but people still liked it because it was sort of a fresh breath of air to the 2b2t community. Elijah204 made a small castle and expanded it more and more until the base was found by a player named 18pac who blew up their storage but left whatever else was built alone as this player admired what was there, due to it being so close to spawn (-21,868 , -4,184 in the nether), forcing the group to release coordinates prematurely and move on to the next base.

Luckily, elijah204 had made a backup dupe stash at around -35k in the nether, knowing that the inevitable will happen soon, the day before the first Lotus City's storage was blown. Elijah204 brought the group to that backup stash and they started off strong once again in the general vicinity of the stash after finding nice terrain to settle down in. There was a full ocean at the chosen location and HandyCorgi made his second attempt at creating the magnificent underwater city. With help from elijah204, they made Rapture once again, but more than 5x larger than the first Rapture. Due to the first city being raided, about half of the players who were there with at the first city lost motivation to play 2b2t anymore since everyone in the White Lotus Society was a so-called 'newfag'. They simply did not have the experience on 2b2t to be able to handle the type of crap that gets thrown at them on the server. The few that kept themselves motivated continued playing 2b2t through each Lotus City afterward. Due to most of the focus being on the new Rapture, the base didn't end up being too expansive past the underwater attraction that elijah204 and HandyCorgi had made. The White Lotus Society once again set out to find more members and created an application form, which was filled out by over 30 players. Of those 30 people, they accepted 10 into the group since about 10 of the applicants were older players who the White Lotus Society knew were not completely trustworthy simply due to having past experience on 2b2t and being in other groups. The remaining 10 applicants who weren't accepted were, although new to 2b2t (meaning they could pretty much be trusted), were just too young to have developed the skills required to successfully play on 2b2t and would never have been able to make it to the base. This has become survival of the fittest, or as some might say, survival of the fattest since people who are actually fit would realistically spend less time on the server than those who are morbidly obese. As of October 1st the base coordinates have been made public and the base is abandoned/partially griefed

Elijah204 had set out to make over 8 backup dupe stashes before the dupe was going to be patched, someday he knew. Pat_The_Wizard and elijah204 began the search for a new, perfect base location to make the greatest Lotus City that will ever be created, Lotus City III. Lotus City II as of Oct 1st, 2019 has been griefed, but only the above ground part of the base was destroyed leaving the underwater section of the base untouched, regardless the base was beyond repair and the coordinates had been made public so the base was abandoned, Lotus City II was used as a stop for new players as they made their way to Lotus City III. This base was originally planned to be a full fantasy-style area with wizard towers and spells all over the place, but elijah204 began to diversify the base and make different districts. The fantasy district was pushed out to the South-West where a flower forest is and began building fantasy-style structures in that area. As a technical mine crafter, elijah204 made a storage system that can sort shulkers rather than individual items since it would take too long to automatically sort individual items. He would dupe donkeys of shulkers, throw them all into the hoppers he made in the ground, which would then be quickly sorted into the system as long at the TPS was high enough. He slowed the system down to be operational at as low as 11 TPS, as the only time the server would usually go under 11 is when there was a lag machine in operation. Although the 10 applicants accepted did all make it to Lotus City II and some to Lotus City III, all 10 of them stopped playing once their priority queue ran out. Yet again, only few persist which was by now, only HandyCorgi, elijah204, and Pat_The_wizard, which is why only those 3 players had a name on the board of ministries in Lotus City III with the recent additions of _abattoir_ and ozzy. Elijah204 kept persistent work on the city, even during vacation through his laptop and mobile hotspot. The city quickly expanded vastly and he would design everything in creative and make a schematic of the build before he would build it in survival just to make sure that everything looks perfect. On Sunday October 6th the base was griefed after a former white lotus member leaked coords to the backstreetboys

A week after Lotus City III was founded by elijah204 and Pat_The_Wizard, elijah204 went to spawn and created a floating landmass with a castle on top, chained to the ground with 4 wizard towers surrounding it, all casting a spell over the castle to keep whatever is inside of it imprisoned between 10k and 20k in the overworld. He created a small town surrounding the eye-catching creation and officially named it Lotus City IV. this was a small project that took 4 days and he afterward returned to Lotus City III, having kept his bed set at that city. Elijah204 did not release the coordinates of this city so that new players could stumble upon it every so often and let it be worn down and eventually leaked, naturally. During the time elijah204 had been building this city, the White Lotus Society was about to be insided by a group named Highland. Although the leader of the group, The_Grand_Lotus, was looking to become allies with the White Lotus Society since they shared an interest in Avatar: The Last Airbender (They both got their name from the game Paicho, which was a part of the story in the television series), the rest of Highland had separate intentions. Highland's members were trying to act like newfags to get into the White Lotus Society and find coords to all their dupe stashes and bases that they haven't yet released; Highland's members were trying to social engineer the White Lotus Society. Highland failed to inside the White Lotus Society due to lack of communication, meaning the elijah204 was able to use his knowledge of statistics and data science to pinpoint every single alt account that Highland used to try to inside White Lotus. The_Grand_Lotus was unaware of his own members attempting to inside the group he was trying to ally with, and thus he left once his members were discovered, assuming that White Lotus could not trust him.

This is the most recent city as of the time this was written, having been started 5 days ago. 5 days ago, the White Lotus Society disbanded due to the owner of its discord server, Emil187 from Germany, deleting the server and unfriending everyone he knew from 2b2t after deciding that he's had enough of it and should move on to more real-life orientated hobbies. Elijah204 had created a secondary group he calls the 'Reuse and Exchange Collective" also known as 'R.E.C' about a week before Emil187 detached himself from 2b2t, just in case White Lotus Society went South at some point, which happened a bit sooner than he would expect. In honor of the beginning of the Reuse and Exchange Collective as well as a sort of memorial for everyone who had joined the group and left, elijah204 went to create a 5th Lotus City that is religion-based (although Elijah is not religious), consisting of churches, cathedrals, and towers representing various members of the White Lotus Society. The center of the new city, a Minecraft recreation of the Notre Dame, represented the beginning of a new era, the Reuse and Exchange collective. Currently the reuse and exchange collective consist of the three core members that have stuck it through for the whole journey, once again - elijah204, HandyCorgi, and Pat_The_Wizard. The '2b2t trio of friends' as they call themselves, do not get involved in the 2b2t community nearly as much as they did in the White Lotus Society and focus more intensely on building up their bases, especially Lotus City III.

This base as of 10/15/19 hasn't even been built yet, but many basic concepts have been debated Throughout the members of the R.E.C. even leaving the lotus city name has been debated. its now 10/22/19 and after many failed attempts at duping with llamas since we couldn't bring the donkeys from the other base eiljah204 and pat_the_wizard and Ozzy have seemed to begin to lose interest in the server. A few weeks later eiljah204 brought up just buying resources from shops and using the pearl exploit to do it, so _abattoir_ set 4 pearls and /killed back to spawn

Here is a picture of Lotus City III's downtown area:

Retrieved from "https://2b2t.miraheze.org/w/index.php?title=Lotus_City&oldid=44250"
Categories:
Cookies help us deliver our services. By using our services, you agree to our use of cookies.