Spawn with several lavacasts in the background

Several lavacasts shown as a part of the https://imgur.com/gallery/HhKqC Imgur album

A lavacast is a structure made of cobblestone created by repeatedly pouring water over lava, generally used to quickly grief a large area. The landscape of Spawn has mostly been replaced by numerous lavacasts over the years. They most often resemble mountains or pyramids but can take on many different shapes depending on the manner in which they were created. Lavacasts often contain small air pockets. They are also sometimes used to create walls, towers, and other large structures. A rare but well-known usage of lavacasts is to create huge symbols, the most famous example of which is the giant cobblestone swastika. The word itself is also commonly used as a verb (eg: "He lavacasted the base.")

2010 4channer pYr01v1aniac claims that there were lavacasts at Spawn during 2b2t's first couple of days in December 2010.[1]

xcc2, however, a 4channer who joined in early 2011, claims and that the very first lavacast he saw was at NFE, several months after he joined. This would have been in early to mid-2011.[2]

chezhead's screenshots show that lavacasts had been made by April 27, 2011. 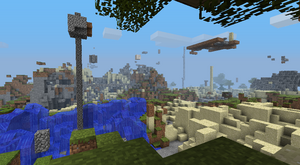 Part of a lavacast can be seen on the far right. 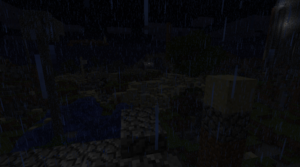 A dark, yet better view of the upper part of the lavacast.

Spawn began to get lavacasted in 2011, and Hausemaster began using WorldEdit to flatten the lavacasts by January 2012.

Spawn began to get lavacasted more than ever in 2016, in response to the Rusher Invasion and War.

Lavacasts can be made in several different ways, but the two main types are staircases and cobblestone monsters. The end structure is always the same though, a giant cobble stone structure.

Retrieved from "https://2b2t.miraheze.org/w/index.php?title=Lavacast&oldid=56279"
Category:
Cookies help us deliver our services. By using our services, you agree to our use of cookies.