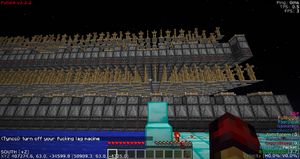 A lag machine operated by Armorsmith. 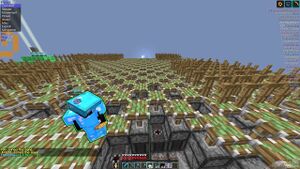 A lag machine is a machine created by a player or players with the intention of making the server as laggy as possible by lowering the TPS. This is often done with the intention of making the server unplayable for new players, causing them to quit. Lag machines are often turned on whenever a YouTuber joins or starts streaming in order to make it harder for them to make videos. During the Rusher War, lag machines were used extensively against TheCampingRusher by making it very hard for him to make a base. Combined with a lack of content and the inability to build anything due to the lag, TheCampingRusher eventually quit 2b2t.

Besides the unintentional lag machine activity caused by Oremonger's redstone contraptions (such as his clock) or gold farms, the first noted use of weaponized lag machines was done by DemonElite119 at Zootopia and The Land of Wolves in an attempt to punish the swarms of newfags that he viewed to be a plague upon a once relatively quiet server as well as to make it difficult for those without beacons and god tools to build, although it was a double-edged sword as it also made it somewhat easier for newfags to escape spawn as the tick rate was so low, hunger drained at a slower rate. At one point, DemonElite119 showed Torogadude one of his lag machine designs.

Despite DemonElite119's objections, Torogadude leaked the lag machine designs to other players, including fellow oldfags, midfags, and even newfags resulting in both DemonElite119 being enraged to the point he was leaking bases out of sheer contempt as well as the mass proliferation of lag machines to players who otherwise had no idea how to construct them which resulted in long term low TPS as there was no longer any control on who was operating them due to the widespread deployment of them by various groups who used them just for the lulz. Torogadude leaked these designs both in various chats such as a Skype chat with users such as Parthicus and Jacktherippa, but also on Youtube which was the source of the mass proliferation.

As time dragged on, and Hausemaster attempted to implement soft-countermeasures against lag machines, Sun_Wukon would join DemonElite119 in the controlled use of lag machines, however this all went out the window after DemonElite119 leaked the base and lag machines were widely proliferated thanks to Torogadude's reckless attempts at attention seeking by means of a Youtube video that detailed the lag machine constructs as well as Oremonger's clock.

2017 saw one of the worst years for TPS on 2b2t. A player by the name of househousehouse1 built a large lag machine in the beginning of the year, probably the largest ever built on 2b2t. He would use this lag machine pretty often, and constantly cause the server to crash. At around the same time, another player by the name of Armorsmith built his own powerful lag machine, which also caused the server to crash and drop TPS below 1. The method used by househousehouse1 was different from the one used by Armorsmith, while househousehouse1 method involved redstone wires and powering them to extreme levels, Armorsmith's design was based on one posted by 2F4U on YouTube a while back.

These two lag machines forced Hausemaster to take action, and he did so by breaking redstone on 2b2t. He also started to delete lag machines using world edit, making some people think that 2b2t isn't a true anarchy server. One of the most famous laggers on 2b2t is Gr1f. When Hausemaster deleted his lag machine, he also deleted the priority queue Gr1f had before because he joined before June 1st 2016. This would cause a major drama later on.

During No Server November, lag machines will often be used as much as possible to bring the server down to a halt, among other techniques. An attempt by its participants in 2020 to crash the server while the youtuber Fit was livestreaming involved lag machines. They managed to kick him back to queue every time, which made it much harder for him to stream.

There are few countermeasures for lag machines, short of Hausemaster deleting them.

The only solid and reliable countermeasure is the deployment of beacons and god tools in order to "defeat" the low tickrate the server suffers as a result of the lag machines. Hausemaster has tried other measures short of deleting them to offset their impact, but it was minimal, when one of DemonElite119's lag machines could bring the server down to 1 TPS, it only improved the server by 5 tps at most, with the server maxing out at 10, but often still dropping to 3-5tps, especially as DemonElite119 built more lag machines and Sun_Wukon also followed DemonElite119's lead by creating a series of networked lag machines built upon DemonElite119's own design.

Retrieved from "https://2b2t.miraheze.org/w/index.php?title=Lag_machine&oldid=55260"
Categories:
Cookies help us deliver our services. By using our services, you agree to our use of cookies.